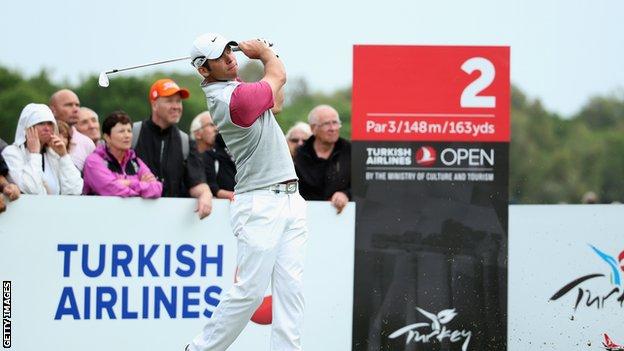 Former world number three Paul Casey shares the lead overnight after a rain-affected first round of the Turkish Airlines Open in Antalya.

Only 15 players completed their rounds after torrential rain and thunderstorms caused a three-hour delay.

Woods, playing in his first strokeplay event after a six-week break, says the changing conditions affected his round at the event on the Mediterranean coast, which is the third tournament of four that make up the 'Final Series' of The Race to Dubai.

"The air is also heavy now with moisture so the ball is not going very far compared to when we were warming up on the range and early in the round," he said after the players had been called off the Montgomerie Maxx Royal course at 16.42 local time.

"Towards the end we were hitting about a half-a-club short."

Casey made a bright start with an eagle three at the first followed by birdies at the second and fourth.

The Irish Open champion dropped a stroke at the fifth before producing a run of four birdies in five holes from the ninth.