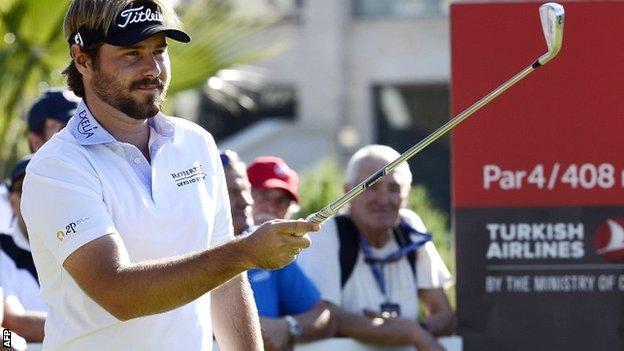 Frenchman Victor Dubuisson enhanced his claims for a maiden European title with a 63 to go five shots clear after three rounds of the Turkish Airlines Open.

The 23-year-old, who began the day in a four-way share of the lead, birdied the first four holes and finished 21-under.

Ian Poulter is second, with world number one Tiger Woods six behind after seven birdies and three bogeys in a 68.

Raphael Jacquelin equalled the European Tour birdie record with 12 in his course record 62 and is also 15-under.

I've got to hang in there, just got to keep fighting, I'm not out of the tournament

The 39-year-old Frenchman had three runs of four consecutive birdies mixed with a double bogey at the par-three fifth at the Colin Montgomerie-designed course on the Mediterranean coast of Antalya.

Dubuisson, who has finished in the top four on three occasions this year, also began with four successive birdies and when he holed from the edge of the green at the par-three eighth he was three strokes ahead.

On the back nine he drove the green at the 337-yard par-four 15th for a third successive birdie and he added another at the closing par-five in a bogey-free round.

Asked about the pressures awaiting him on the final day he said: "I'll try to not think about it, because if I think about it I will put too much pressure on myself.

"With all those great players it will be a very tough day. It's going to be a very long day, I'll try to play my game."

Woods appeared to damage his right wrist when a full blooded swing with a hybrid club from beneath the large umbrella pines to the right of the 11th was impeded by a wispy sapling, but he recovered superbly from the sand to make a birdie and reported no injury damage.

After consecutive dropped shots from the 15th he fired another drive off target at the last, this time to the left, but after taking a free drop from a cart path he holed a 25-foot putt for another remarkable birdie.

"I didn't really warm up well and I was kind of fighting on the front nine and getting away with it a bit," he said.

"It finally caught up with me and I hit a lot of bad shots on the back nine but somehow I made a four on 18. I've got to hang in there, just got to keep fighting, I'm not out of the tournament."