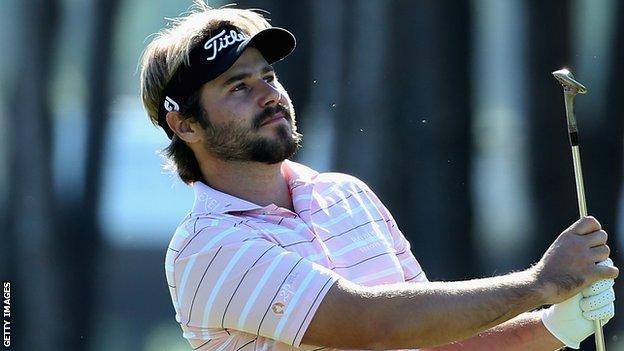 The 23-year-old, who started the day five shots in front, carded a final-round 69 to end two clear on 24 under.

Ian Poulter (69) tied for fifth with France's Raphael Jacquelin at 19 under.

Sweden's Henrik Stenson (69) finished one stroke further behind to maintain his lead the Race to Dubai rankings.

In Antalya, Dubuisson struggled to recapture the form that took him to a third-round 63 and only picked up his first shot of the day at the 10th.

But the tournament was turned on its head when he dropped a shot at the 14th, his first for 33 holes, and Donaldson holed out with a seven iron to the 180-yard 16th to grab a share of the lead.

Rose, playing with Donaldson, birdied 16 to make it a three-way tie, but Dubuisson, the world number 108, sealed victory with three birdies in the last four holes as some of golf's biggest names fell short.

Donaldson missed a six-foot eagle putt on the last, Rose bogeyed the 18th, Woods left it too late despite four birdies in his last six holes, and Poulter bogeyed the 12th before a run of six straight pars to finish.

"The start was a bit difficult because I did not hit the ball well and struggled on the greens. I didn't hole any birdie putts on the front nine and all the good players were coming back at me.

"But I spoke to my caddie at the turn and told him everything is OK and I would make one or two birdies on the back nine."