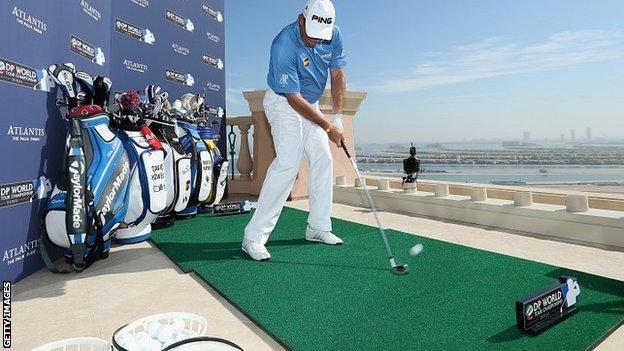 As Henrik Stenson, Justin Rose, Graeme McDowell and Ian Poulter bid for the $1.5m (£1.3m) Race to Dubai bonus, debate rages over the format of the European Tour's finish to the year.

In a BBC Radio 5 live programme examining the issues facing the professional game, a leading manager and promoter accuses the Tour of lacking a strategy.

While admitting that the European Tour's 'Final Series' should work eventually, Andrew "Chubby" Chandler describes its current arrangements as "a complete cock-up".

Understandably, the Tour dismisses that claim but admits it is looking at potential changes to the format for the lucrative closing sequence of tournaments.

Ernie Els, Sergio Garcia and Charl Schwartzel are all missing from the concluding event in Dubai, the DP World Tour Championship, because they failed to meet the eligibility criteria.

Twelve months ago the Tour announced that players would have to take part in two of the first three tournaments in its Final Series - the collective term given to the last four tournaments - in order to qualify for the finale. The three absentees in the Middle East failed to fulfil this obligation.

Last week Schwartzel told BBC Sport he was considering quitting the Tour over the issue - the South African missed the Shanghai-based BMW Masters and HSBC Champions tournaments - while Race to Dubai contender Rose and former world number one Luke Donald have told 5 live it is difficult to fulfil the current obligations.

But former Ryder Cup captain Colin Montgomerie says the Wentworth-based organisation is "dead right" to insist on this level of participation.

Arguments have begun among players, agents and administrators as the Tour tries to come to grips with a global calendar bossed by the PGA Tour's September play-off series.

"The FedEx Cup Series [the US play-off series] makes the golfers play more than they should do and so they then have to take big breaks," Chandler told the 5 live Golf programme, to be broadcast on Wednesday evening.

The European Tour was without an International Schedule event in August this year as it struggled to find sponsors, with its biggest stars based in the United States.

And as he was banking his bumper cheque, many of the continent's biggest names were either resting or taking appearance money in Asia. The result was yet more star absences from tournaments like the Alfred Dunhill Links Championship in Scotland.

"What the European Tour have got to do is work out what their biggest weeks are, and I don't think they know that," said Chandler, who was promoter for the third leg of the Final Series in Turkey last week.

"I think you will find that this Final Series, although it's been a complete cock-up, will be something that will have rules that work and gets the European Tour to somewhere that it should go."

The agent, who represents Schwartzel, Lee Westwood and a host of other top names, added: "The fact they're playing for thirty and a half million dollars over four weeks is a bloody good start."

"I don't agree obviously. I think it has been relatively successful but we are aware of the criticism from two or three players," Waters told BBC Sport.

"We'll always look forward and review and refine, and we always take notice of all the comments. We are aware of some of the criticism.

"But we have to balance that between what has actually happened in terms of having three very successful events, three very happy sponsors and tournament promoters and the criticism from a number of players."

An announcement on any potential changes is expected on Sunday, but Montgomerie is urging the Tour to stand firm and leave alone the season finale. He accuses the players who are complaining of "losing a bit of reality here".

The 50-year-old Scot said: "These players should want to play. What do we do to compromise? The compromise is to keep it exactly the same as it is. There is no compromise....and that is final."

Meanwhile, all parties seem agreed that reports earlier in the autumn suggesting the PGA Tour was planning to take over its European counterpart were wide of the mark.

"That's not true," we were told by the US circuit's Commissioner Tim Finchem.

"We want to work closely with the other tours," he added. "There's too much to be gained not to get it together."

When asked whether staging a World Golf Championships event in Europe might help redress the balance, Finchem said: "That could be one of the solutions. These are the kind of things we should be looking at.

"We can talk to the European and other tours about what golf will be like in the next 10 to 15 years, and those conversations are happening and should continue to happen."

It is clear there is much to be discussed. In Stenson, Rose, Poulter, McDowell and Rory McIlroy, the continent boasts some of the hottest talent in the game.

But while Europe might be able to beat America when a Ryder Cup is at stake, in the current climate it's a different story when the competition is to attract the services of these players.

The US has big sponsors and competing TV networks to bolster its coffers and bankroll its play-offs.

Europe has to be more imaginative, and if the much anticipated shoot-out for the Race to Dubai spoils materialises this weekend, it can only help their cause.