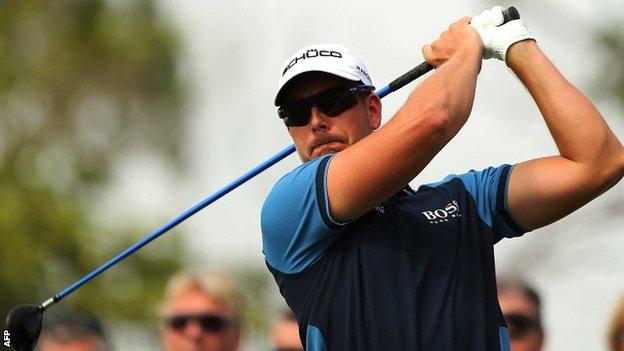 Race to Dubai leader Henrik Stenson carded a four-under-par 68 for a share of fourth place after the opening round of the World Tour Championship.

The Swede, 37, will become the first to claim the PGA Tour's FedEx Cup and the European Tour equivalent in the same year if he wins in Dubai this weekend.

Two men could usurp him by taking the final event - Justin Rose, who fired a 70, and Graeme McDowell, who shot a 72.

Spaniard Alejandro Canizares has a one-shot lead after seven birdies in a 66.

A total of nine players can still win the European Tour prize through various permutations.

Only two of those in contention were outside the top 10 after the first round, Northern Ireland's McDowell recovering from two dropped shots in his opening three holes to post three consecutive birdies on the back nine to lie joint 27th, and Fernandez-Castano mixing four birdies and three birdies in a 71 for a share of 17th.

"It's an incredible run of form which Stenson has had, you can stretch it all the way back to the Scottish Open, and there is just no sign of this irrepressible form stopping.

"For someone in his position at the top of the Race to Dubai to find himself just two shots off the lead really is an excellent start."

He was hampered by a wrist injury coming into the European Tour finale but collected three birdies on the front nine and two more coming home before three-putting the final green for his sole bogey.

"It has been a lot of hard work all season and I just let my focus slip on the last," Stenson admitted.

"That sucks, but I am still in good shape and playing nicely. The guys are running on fumes so everybody is looking forward to getting done.

"You can't win a tournament on Thursday but you can certainly play your way out of it. I would have taken four under at the start of the day so I just have to let the disappointment of the last slip away."

If Ryder Cup favourite Poulter triumphs at Jumeirah Golf Estates' Greg Norman-designed Earth course, Stenson will have to finish second to deny the Englishman top spot in the overall standings.

Poulter, fourth in the standings, carded four birdies and one bogey in his opening 69, but was frustrated at missing a number of chances to be higher than joint-seventh on the leaderboard.

"I made two putts which were outside birdie chances and took a couple more but the rest were missed. I am frustrated but happy to be only three behind," he said.

"I need to continue to be aggressive and see if I can nick it at the end. It's a good mix to be really angry being three under par and still being in there for the next three days."

Seven years and almost 200 events have since passed without him being able to add a second title.

Rory McIlroy, who birdied the final five holes to claim this event 12 months ago but is yet to win a tournament in 2013, birdied three of the opening four holes but fell away to finish in 71.