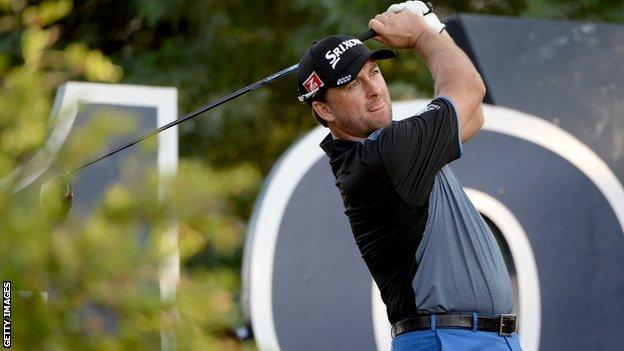 Graeme McDowell lies six shots off the lead after the first round of the DP World Tour Championship finale as he chases the Race to Dubai title.

McDowell carded four birdies and four bogeys in a level-par 72 to lie in 27th spot, with Rory McIlroy one shot better off after an opening one-under 71.

Henrik Stenson, who leads the European Tour going into the final tournament, is tied for fourth on four under.

Alejandro Canizares leads by one from Kiradech Aphibarnat and Marcus Fraser.

McDowell, who lies third in the Race to Dubai standings, needs to win at the Jumeirah Golf Estates to overhaul Stenson and second-placed Justin Rose.

The world number 11 was second in the standings but missed last week's event in Turkey and dropped to third after Rose finished joint third.

The former US Open champion ended his first round strongly by posting birdies on consecutive holes from the 14th to the 16th.

"'Here we go again' crossed my mind on the front nine because these greens have got in my head in the past," admitted McDowell.

"But my game is in good shape and I committed to not reacting to what happened. They are tough greens to read and I have to accept that and move on.

"You can't win it today but I could easily have blown myself out of it."

McIlroy was among the earlier starters of the 56-strong field and recorded four birdies and three bogeys in a steady start to the championship.

The two-time major champion topped the money list on both sides of the Atlantic last year, collecting five victories including his second major by eight shots in the US PGA Championship.

The 24-year-old's struggles on and off the course this season have been well documented however, leaving him a lowly 46th in the Race to Dubai entering the season finale in Dubai, an event he won thanks to five birdies in the last five holes 12 months ago.

McIlroy got off to an excellent start on Thursday, holing from 30 feet for a birdie at the first and two-putting the par-five second for another.

The Northern Irishman also picked up a shot on the fourth before a poor chip from over the back of the fifth green led to a bogey five, but he soon made amends with a birdie on the par-five seventh.

A duffed chip to the eighth after a wayward approach cost McIlroy a second bogey and left him two under par at the turn.

McIlroy was two under par and on the 17th hole at that point, but found water on the par-five 18th to run up his third bogey of the day and had to settle for an opening 71.

"I feel like I played better than the score suggested and turned a 67 into a 71," said McIlroy, who is still seeking his first win of the year.

"I got off to a great start, was three under par through four and playing really nicely and then got on a run of pars on the back nine. I had chances at the 10th, 14th, 15th and 16th and I'm coming off the course disappointed but I know there is a good score out there."

McIlroy had spoken on Tuesday of the off-course distractions which have contributed to a poor season by his standards, most notably the legal dispute with his former management company.

"It's much better than it has been the last few months and I am playing better, which is important. It's good that my game is back on track.

"I have this event and two more so it would be great to get a win before the end of the season."