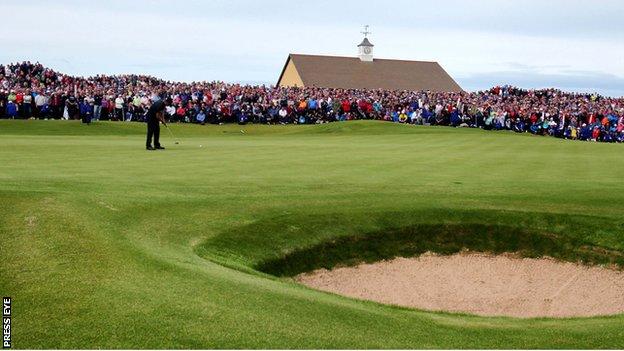 Royal Portrush is a contender to host the US PGA Championship if the PGA of America goes ahead with plans to stage the event outside the United States.

The earliest possible date for a move is 2020, and PGA of America president Ted Bishop suggested the Northern Ireland course as a venue.

Rory McIlroy has been approached by the PGA of America about Northern Ireland hosting its first major since 1951.

"I've spoken to Ted and people back at the PGA about this," said the two-time major winner from County Down.

"They approached me about it a few weeks ago and I said I would be all for it. I'd love to play a major championship at home - that would be nice."

He added: "I think given the powerful effect that Irish golfers have on the game today, that might be a good place to start."

The PGA of America confirmed last month that a committee is studying the impact of holding the event around the world.

Asia was thought to be the most likely venue in 2020 until Bishop's comments on the Golf Channel's 'Morning Drive' programme.

The R&A denied reports this summer that the Open Championship was set to be held at Portrush in either 2018 or 2019.

R&A chief executive Peter Dawson admitted earlier this year that Portrush is "a fantastic golf course," but concerns remain over the infrastructure required to stage a major and Dawson feels the current nine-course Open rota is "about right".

The County Antrim course has not hosted a major since the 1951 Open, but the Irish Open was a huge success there in 2012.

Former US Open champion and Portrush native McDowell admitted the possibility of staging one of golf's four major championships was "very bizarre".

He added: "It's always been a dream of mine to play the Open there but the US PGA would do nicely.

"It's very bizarre and an amazing statement. I couldn't believe it and read it three times.

"I had heard the US PGA was looking at going global, which is a very positive step forward, but I was expecting Asia, not the north coast of Ireland.

"Even if it never comes to fruition, it's a great boost to be mentioned in that breath. My brother Gary is on the greenkeeping staff there and he will have a spring in his step.

"Having three majors in America with the way the game is growing is a little too weighted. It's the fourth major of four so taking it somewhere else would really boost the interest. Asia, Australia or Europe would really embrace it."