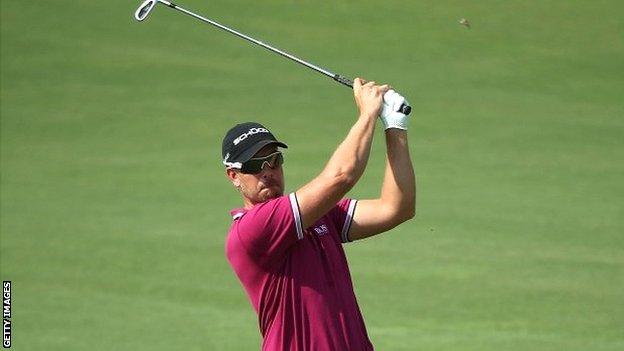 Henrik Stenson consolidated his bid for the Race to Dubai title with a 64 to go a stroke ahead at the halfway stage of the World Tour Championship in Dubai.

The Swede is 12 under and seeking to become the first player to win the PGA Tour's FedEx Cup series and European Tour money list in the same season.

Victory would ensure that but Justin Rose can usurp Stenson by winning and the Englishman is five shots adrift.

Graeme McDowell can also eclipse them with the title but he is four under.

Several other players have rather more remote chances of the Race to Dubai title through various permutations and the most likely of those is Ian Poulter, fourth in the standing going into the final event.

The 37-year-old Ryder Cup favourite needs to win the tournament and hope Stenson finishes outside the top two, and Poulter recovered from two dropped shots in three holes at the start of the back nine to post a 68 for a share of seventh place, five shots off the lead.

"As long as I'm in striking distance come Sunday afternoon, then we might see some fireworks," the Englishman said.

But Stenson showed there was little likelihood of him falling away with another demonstration of exemplary driving and iron play.

The world number three, second to Phil Mickelson at this year's Open Championship but yet to win a major, was even able to miss three putts from inside eight feet on the Greg Norman-designed Earth Course at Jumeirah Golf Estates.

He made eight birdies, four on each nine and his three-putt on the 18th green in round one remains his only dropped shot of the tournament.

At the 486-yard par-four 16th, a mammoth tee shot left him with just a sand iron to the green and the approach finished within two feet of the flag to set up a birdie.

Then at the closing par five he spun his approach back off the slope to a similar distance to pick up another shot.

"I hit a lot of fairways, a lot of greens, gave myself opportunities and rolled a couple of nice putts," Stenson commented.

"It could be a bit better, but there's no point being greedy either. Everyone is going to miss a few out there on the greens. They are tricky to read, a lot of grain and they're quick. I'm delighted with the first two days' work."

First-round leader Alejandro Canizares had hoped to match Stenson at 12 under playing the last, but electing to lay up with his second shot he found the meandering stream and did well to salvage a par five and secure second spot.

Defending champion Rory McIlroy, without a title in 2013, is six under after a 67 containing five birdies, an eagle and two bogeys.

"I think somewhere around 20 under par will win so I will need a couple of 65s," said McIlroy, who shot back-to-back rounds of 66 to win this event 12 months ago.

"I finally feel I have got to the stage now when I can contend week in, week out and on the rare times I have got into contention this year I feel like I have played my best golf," the 24-year-old Northern Irishman said.

Another former world number one yet to win this year, Luke Donald, now ranked 17th, began with a bogey but then compiled six consecutive birdies and returned a 66 for a five under halfway total.