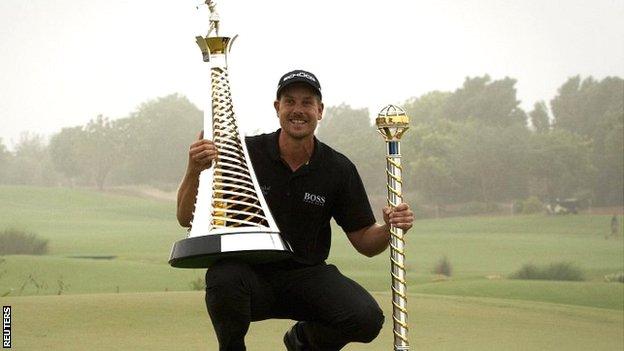 Henrik Stenson became the first man to win the Race to Dubai and FedEx Cup in the same year as he took the World Tour Championship by six shots in Dubai.

The 37-year-old Swede had six birdies and finished with an eagle for an imperious bogey-free 64 and a 25-under-par total, a new tournament record.

Ian Poulter was second after a fine 67, with Victor Dubuisson two further back.

US Open champion Justin Rose, who would have taken the overall title by winning this week, finished 10 shots adrift.

Stenson's eighth European Tour title was his first of 2013 and caps a remarkable run of form for a player who had slipped to 230th in the world rankings less than two years ago.

He finished second and third in the final two majors of the year, and in September was the first European to capture the $10m FedEx Cup prize, after winning two of the four concluding play-off tournaments.

Stenson, who began the final day only one stroke ahead, is the second Swedish golfer to win the European money list, after Robert Karlsson won the final edition of the Order of Merit in 2008.

The final-day conditions were a complete contrast from the previous three days, unbroken warm sunshine giving way to overcast skies and a stiff breeze on the Greg Norman-designed Earth Course at Juremiah Golf Estates.

The opening hole rather set the tone for what was to follow, with two of Stenson's challengers both dropping shots.

Poulter saw a short par putt spin out and Rose left his effort two feet short. Soon afterwards Stenson, in the final pairing with Dubuisson, sent his approach to within a yard of the flag and holed out for a birdie.

The metronomic Swede continued to pepper the pin and collected three more birdies in an outward nine of 32, matching his best of the week.

Poulter recovered impressively with consecutive birdies but his battle was for second place with Dubuisson, who won his maiden European title at last week's Turkish Open.

Dubuisson compiled 24 birdies on the first three days and added three more in the opening seven holes of his final round, but dropped shots at three of the next five.

It was the Englishman who prevailed courtesy of birdies at the final two holes, a superb tee shot with a hybrid club to within three feet at the 19-yard par-three 17th and a neat approach at the closing par five.

But no-one could match the exploits of Stenson. At the formidable 12th, a 476-yard par four with the wind gusting across, he moved five shots clear when a majestic five iron from 177 yards finished two feet from the hole and created another birdie.

Somehow that was eclipsed at the last when after bisecting yet another fairway with his trusty three wood and taking a drop from a sprinkler head, his approach trickled back to just 12 inches from the flag.

"It has been a dream season," said Stenson, who is assured of a place in next year's Ryder Cup team for the first time since 2008 and now turns his focus on becoming the first Swedish man to win a major. "I played so well this week. I knew the guys would try to catch me, especially Ian who never gives up. I wanted to stay ahead of him and I managed to do that.

"I don't know how I am going to be able to top this next year but I am going to give my best in the majors and that would be the icing on the cake."

Defending champion Rory McIlroy remains without a title in 2013 but continued his encouraging return to form after recovering from bogeys at the first two holes with seven birdies in a 67 for a final total of 15 under, for joint-fifth, a score matched by two other former world number ones, Luke Donald and Lee Westwood.

"There's been a lot of progression, a lot of positive signs. I've learned a lot of things this year. For the most part I'm just really happy my game is back to where I want it to be," said McIlroy, 24.

His fellow Northern Irishman Graeme McDowell, who like Rose could have taken the Race to Dubai by winning the title, had an eagle and a double bogey in a 71 and was in a share for 17th at nine under.

Meanwhile, the European Tour announced the Race to Dubai, first introduced in 2009, would continue until at least 2017.

Chief executive George O'Grady said: "This is the perfect venue to finish our year. The climate is excellent, the facilities here are superb, and the welcome from everyone here in Dubai is simply outstanding."

The 2014 schedule has also been revealed, with a minimum of 48 tournaments in 26 different destinations.

Two new tournaments have been added, taking place in consecutive August weeks in Denmark and the Czech Republic, while the Italian Open in Turin from 28-31 August will be the last qualifying event for the Ryder Cup in Gleneagles in September.