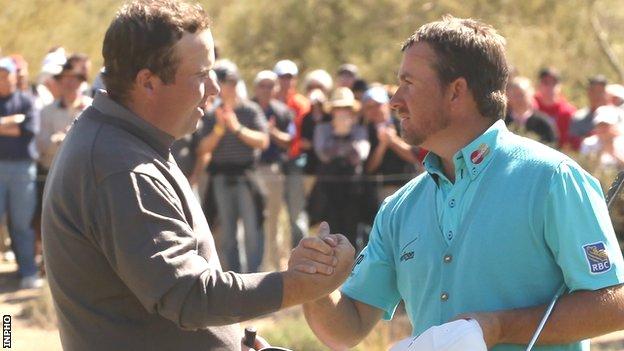 Graeme McDowell is six shots adrift at the World Cup in Melbourne as Ireland struggled in the first round.

The tournament's format has been changed from being solely a team event to primarily an individual one with a team component.

The Portrush player carded a one-over-par 72 while Ireland team-mate Shane Lowry had a 75.

Ireland are 10 shots behind Denmark and USA, while Kevin Streelman and Thomas Bjorn top the individual leaderboard.

McDowell enjoyed one of the shots of the day, holing a long-range chip for an eagle on the par-four ninth, but stumbled with double-bogeys on the sixth and 18th.

McDowell said on Wednesday that he expects to play for Ireland at the 2016 Olympic Games in Rio.

Representing Ireland at the World Cup rules out the option of playing for Team GB in Brazil.

Olympic rules state that he could only play for Team GB if three years have passed since representing Ireland.