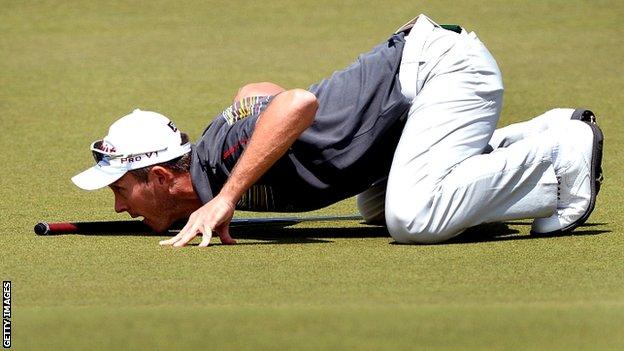 Denmark's Thomas Bjorn and American Kevin Streelman both shot 66 to share the first-round lead at the World Cup of Golf in Melbourne.

The pair also took their respective nations to the top of the team standings at Royal Melbourne Golf Club.

Manley is one of eight individuals in the 60-player field after Wales team-mate Jamie Donaldson withdrew injured.

The tournament has existed in some format since 1953 but became a biennial event in 2011 to fit around the inclusion of golf as an Olympic sport from 2016. The entry format, using world rankings and the number of players eligible from each country based on those rankings, will be used at the Rio Games.

"The greens are electric, I have not played on any as fast,'' said Manley, the world number 346 who only secured his European Tour card for next season last week.

"I am not quite used to this really from where I am and the European Tour. They're very scary."

The scores of the top two players from each nation are combined to produce a victorious team at the end of the four days, but this year an individual stroke-play element has been added to mirror the format that will be used at the 2016 Olympic Games in Rio.

Bjorn made seven birdies and a double bogey at the par-four fourth in his round, while Streelman dropped strokes at the 16th and 18th to drop back to five under.

"I thought, 'Well, this could be a long day,'" said Bjorn after a shaky start, "but I just kind of kept my composure and made some good birdies and kept playing solid.

"It is, in my eyes, probably the finest golf course you can ever play."

World number two Adam Scott could only manage a 75 after a disastrous quintuple bogey on the par-four 12th, losing a ball with his first drive and sending his next into unplayable territory.

Scott's team-mate, Jason Day, raised Australian hopes with a three-under 68. The 26-year-old three-time major runner-up learned earlier this week that eight relatives had died in Typhoon Haiyan in the Philippines.