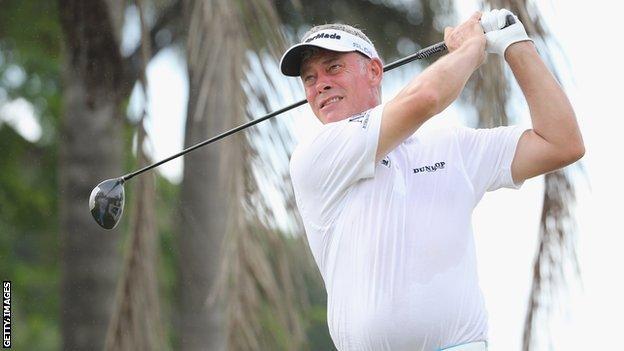 Northern Ireland's Darren Clarke is two shots behind leader Raphael Jacquelin after round one of the Volvo Golf Champions event in Durban.

The 2011 Open champion carded five birdies and two bogeys in an opening three-under-par 69 in South Africa at the first European Tour event of 2014.

Jacquelin leads on five under; South Africa's Louis Oosthuizen is one back.

Scotland's Colin Montgomerie and County Down-based Simon Thornton are among seven players in fifth on two under.

Montgomerie, who has largely played seniors golf since turning 50 last year, was inches away from making a hole-in-one on the par-three 15th, a feat which would have won him a digger worth £45,000.

However, he admitted he would have swiftly asked the tournament sponsors for the cash instead and split it with caddie Alistair McLean.

He did however sink three birdies in the final five holes to defy strong crosswinds blowing in from the Indian Ocean.

"I was playing well at the end of last year and I started to play a lot more golf," said Montgomerie.

"I had not been having much fun on 7,500-yard courses on the main tour but I am a member of three tours now (European Tour and two seniors tours) and it's given me more freedom to choose courses I can get round."

The Scot's playing partner, Jacquelin, was the only player in the elite 36-man field not to drop a shot and he too hit three birdies in the closing five holes to take the lead.

Clarke, who will play more tournaments in the United States this year, and France's Victor Dubuisson are both three under at the 36-man event.

"I have played here a lot over the years, so I know what the course is like and how difficult it plays in breezy conditions like we encountered on Thursday," said 45-year-old Clarke.

"It's a case of minimising any poor shots, keeping it in play and trying to work your way round from there.

"I've had good and bad experiences here - it's a tough golf course and when the wind blows it makes it even more so."

Ireland's Padraig Harrington mixed four birdies with three bogeys to finish on one under, alongside England's David Lynn and Jamie Donaldson of Wales who both had double-bogey sevens on their cards.