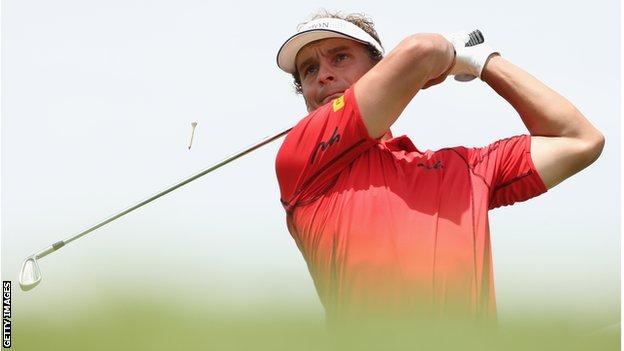 Joost Luiten made the first albatross of the season to take the joint lead of the Volvo Golf Champions in Durban.

The Dutchman's first ever albatross came when he holed his second shot on the 560-yard par-five 10th.

Luiten, 28, joins England's Tommy Fleetwood, who also shot 67, and South Africa's Louis Oosthuizen on seven under par after round two.

Northern Ireland's Darren Clarke (71) is tied sixth on four under while Jamie Donaldson of Wales (71) is two under.

Donaldson recovered from a triple-bogey six on the par-three 12th, by picking two shots up with an eagle on the par-five 14th, as he posted a second one-under-par round to lie five shots off the lead, alongside Ireland's Padraig Harrington (71).

It went straight at the pin and it went in

There was only one albatross in the European Tour's 2013 season - by Chris Doak at the Madeira Islands Open.

Luiten said: "It was playing downwind, the hole. I hit a good drive down the middle of the fairway with 227 metres left.

"I hit a four iron and basically went straight at it and it just pitched exactly where I wanted, just in front of the green. I hoped it would just release up the slope and that's what it did. It went straight at the pin and it went in.

"It was a good feeling, to say the least."

Luiten's and Fleetwood's second-round scores of 67 were matched by Italy's Matteo Manassero, who climbed to third on five under, and Branden Grace of South Africa, who moved to three under alongside England's Chris Wood (71).

Clarke, tied in fourth with overnight leader Rafael Jacquelin of France, is still well placed after following up his first-round 69 with a one-under 71.

2011 Open champion Clarke moved into the joint lead after three birdies but he lost ground on the back nine and needed a good up and down from a bunker at the last to stay under par for the day.

Harrington was forced to change caddie after six holes of his round as his regular bagman Ronan Flood was suffering from food poisoning.

Irish photographer Pat Cashman carried Harrington's bag for the remainder of the round.

Simon Thornton is level with Harrington on two under after also carding successive rounds of 71 while Michael Hoey is in a share of 20th spot on one over after a 73.