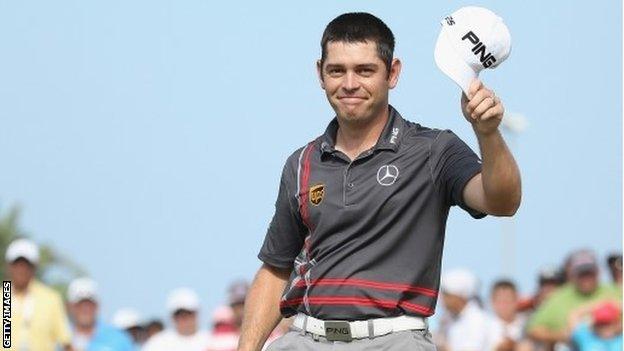 Oosthuizen carded a four-under-par 68 to win on 12 under, one shot clear of compatriot Branden Grace (68).

England's overnight leader Tommy Fleetwood finished with a level-par 72 to tie for third with Joost Luiten of the Netherlands (71) on 10 under.

Ireland's Padraig Harrington hit a 67 to finish tied fifth on nine under par.

All seven European Tour events staged at Durban Country Club have been won by South Africans.

Eight of the last 11 tournaments in South Africa have been won by home players.

Harrington had five birdies and an eagle in his five-under-par round and set the clubhouse lead as he posted the joint lowest score of the day to jump up the leaderboard.

However, nine under never looked likely to win the tournament with both Oosthuizen and Grace moving to 10 under halfway through their rounds.

Oosthuizen dropped a shot on the 10th but successive birdies on the 13th and 14th holes saw him move up to 11 under.

Meanwhile, Grace, who was playing in the group in front of his compatriot, parred the first five holes of the back nine but bogeyed the 15th to fall two shots behind.

He made amends with a 35-foot birdie putt on the 16th and then birdied the last to set the target at 11 under.

Back on the 16th Oosthuizen, who had a triple-bogey seven in round three, dropped another shot on Sunday and suddenly he was trailing.

the 31-year-old responded well though with a birdie on 17 before driving just off the green at the 18th, leaving a short chip and putt to win the tournament.

Fleetwood, who began the day with a one-shot lead on 10 under, birdied the second to briefly stretch his lead to three but fell back to eight under with bogeys on the fifth, seventh and ninth holes.

He birdied the 10th and then had a run of seven pars before picking up another shot at the last.

Luiten, who started on nine under, dropped shots on the opening two holes and although he clawed those back with birdies on the sixth and eighth, he could only pick up one more shot on the back nine.