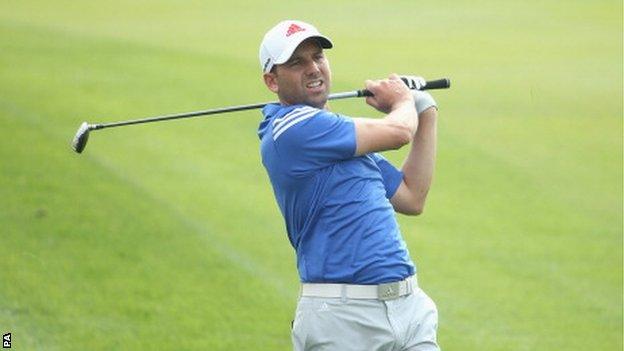 Sergio Garcia described the rough at the Abu Dhabi HSBC Championship as "dangerous" after he struggled to a four-over-par 76 in the opening round.

Garcia, 34, initially injured his shoulder in the pre-tournament Pro-Am and damaged it further hitting from the rough on Thursday.

"I have tweaked a muscle and hitting from the rough is not helping," said the world number 10.

Watch out for Kaymer

"We will see how it feels on Friday," he said. "Unfortunately, the way the course is set up it could happen to more people.

When asked if he felt the rough was dangerous, he added: "I would say so."

The Open champion Phil Mickelson suffered a back injury playing from the rough on the ninth, his final hole, but the left-hander does not see anything dangerous about the course.

"It's a world-class course," he said. "There's nothing unfair about it, it's just difficult. I twinged my back on the last hole. You have to be careful and maybe just wedge it out and not risk any injury."

Spain's Rafa Cabrera-Bello, Frenchman Romain Wattel and England's Matthew Baldwin share a three-way tie for the lead after carding 67 in the opening round.

Paul McGinley marked the anniversary of his appointment as Europe's Ryder Cup captain by shooting 68 in a round that included five birdies.

"An important part of my duty is to stay competitive so that I can play and not be a ceremonial golfer," said McGinley.

"That's why I'm really motivated about my golf and that I stay competitive. I'm treating my golf seriously."

Former world number one Rory McIlroy was in superb form with his driver and had minimal problems with the rough on his way to a 70.

"I played well and was very happy with how I hit the ball from tee to green," said McIlroy, who missed the cut at the event in 2013.

"I hit it long and straight and just did not take advantage of some of the opportunities, especially on the last two holes. It definitely could have been a bit better but it's a solid start and I was pleased."