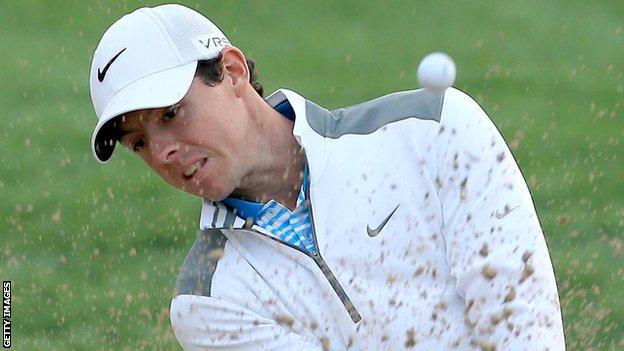 Rory McIlroy made a solid, bogey-free start in his first competitive round of the season at the Abu Dhabi Championship on Thursday.

The Northern Irishman carded a two-under-par 70 and was three shots behind the leading group.

Michael Hoey had a three-under 69 while Ryder Cup captain Paul McGinley is one shot behind the leaders on four under.

Darren Clarke bogeyed his last two holes to end the day on two over with Gareth Maybin firing a battling 73.

After starting at the 10th, Maybin slipped to four over after taking a triple-bogey eight at the second hole but three birdies in his final seven holes left him only six off the pace.

2011 Open winner Clarke had six bogeys and four birdies in his 74.

Three players are tied for the lead on five under par - England's Matthew Baldwin, Romain Wattel of France and Spaniard Rafael Cabrera Bello.

Former world number one McIlroy was making his first appearance of 2014, having ended 2013 in fine form with his only victory of the year in the Australian Open.

On his 2014 bow, some superb driving meant 24-year-old McIlroy had minimal problems with the rough during a flawless 70.

McIlroy started at the 10th and got his first birdie at the 18th, pitching to eight feet and rolling in the putt.

"I played well and was very happy with how I hit the ball from tee to green," said McIlroy, who missed the cut in this event last year in his first event with his new clubs.

"I hit it long and straight and just did not take advantage of some of the opportunities, especially on the last two holes.

"It definitely could have been a bit better but it is a solid start and I was pleased."