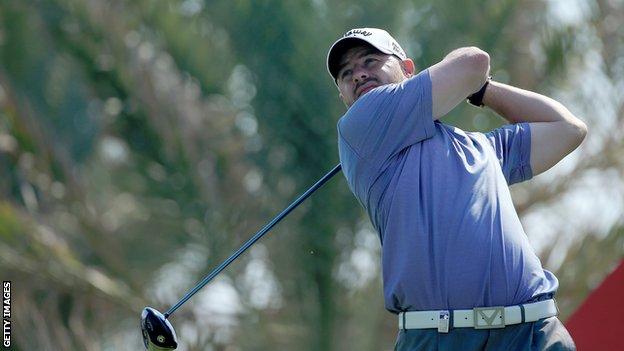 Craig Lee expressed delight after his second-round 67 gave him a share of the lead at the Abu Dhabi Championship.

The Scot followed up his opening round of 68 with another impressive display on the greens to sit on 9 under par alongside Spain's Rafael Cabrera-Bello.

"I'm delighted. I played really nicely early doors and managed to hole a few putts on top of that," said Lee.

"That kind of got the ball rolling and I felt in a nice position."

Lee said a late birdie helped boost the closing stages of his second round.

"I didn't play that great towards the tail end but managed to throw in a birdie at 17; that kind of kept the round going," he added.

"Coming in from winter you never know how rusty you're going to be. I played well yesterday and hit a few loose shots today, but managed to get by by holing some putts.

"There's scoreboards out there (on the course) and I'm not one of these golfers that shies away form them. I like to know what's going on and who's round about me.

"I knew what position I was in. After the first couple of practice rounds they cut the rough down considerably. You can actually get a wedge onto it now as opposed to just a sand wedge.

"The greens are so good that if you get the ball tracking on line then you know it's going to go in."

"It makes our lives a bit easier."

Among the other Scots in the field, Colin Montgomerie is three under at the halfway point of the tournament, Peter Whiteford is level par but Paul Lawrie is expected to miss the cut after finishing on nine over.