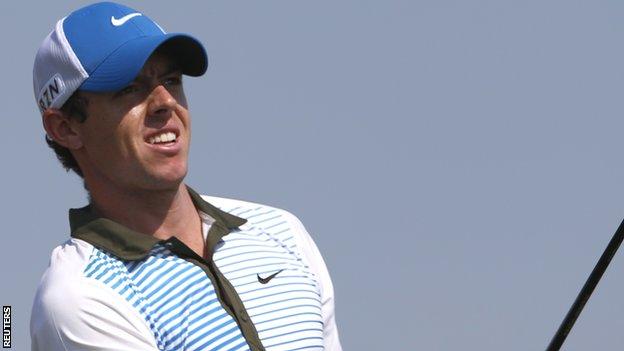 Rory McIlroy is two shots off the lead at the halfway point of the Abu Dhabi Championship after recovering from a double-bogey for a five-under-par 67.

The Northern Irishman, who carded a 70 in his opening round, was five under par for the back nine.

Scotland's Craig Lee and Rafael Cabrera Bello of Spain lead on nine under.

"It is a good position to be in and I am excited. It is a great way to start the season, being in the mix with 36 holes to play," said McIlroy.

"I hit a poor tee shot on the sixth and took a double-bogey there but I did well to get back to level par for the round at the ninth.

"I gave myself a target of four under for the back nine.

"I felt if I could do that I would be right there for the weekend and I managed to go one better."

McIlroy's fellow Northern Irishman Michael Hoey is on four under par for the tournament - five off the pace - after a one-under 71 in his second round.

Belfast player Hoey had one birdie and no dropped shots on Friday, following on from his fine 69 in the first round.

Darren Clarke, the 2011 Open champion, and Ballyclare player Gareth Maybin are both on one under par.

Clarke improved on his first round by five shots to sign for a 69 while Maybin had two birdies in a flawless 70.

Europe's Ryder Cup captain, Paul McGinley, stayed on the four-under mark after a 72, while Damien McGrane remained on two under for the tournament as he too went round in level par.

Padraig Harrington, however, slipped down to one over after failing to record a single birdie in his 74.