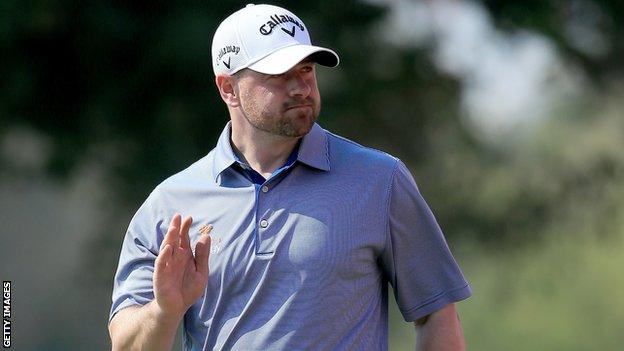 Scotland's Craig Lee shares the lead at the halfway stage in the Abu Dhabi Championship.

The 36-year-old added a 67 to his opening 68, as Spain's Rafael Cabrera-Bello joined him on nine under.

Lee is looking for his first European Tour win after losing out to Thomas Bjorn in a play-off for the Omega European Masters last September.

Former world number one Rory McIlroy is two off the lead after recovering from a double bogey for a five-under-par 67.

It is a great way to start the season, being in the mix with 36 holes to play

England's Danny Willett carded seven birdies and an eagle to finish with a nine-under 63 and move into second place, just a shot behind Lee and Cabrera-Bello.

He was five over par after 10 holes of the first round, but played the remaining eight in four under and is 13 under for his past 26 holes.

Joint-leader Lee said a late birdie helped boost the closing stages of his second round.

"I didn't play that great towards the tail end but managed to throw in a birdie at 17; that kind of kept the round going," he said.

McIlroy, meanwhile, said: "It is a good position to be in and I am excited. It is a great way to start the season, being in the mix with 36 holes to play.

"I hit a poor tee shot on the sixth and took a double bogey there, but I did well to get back to level par for the round at the ninth.

"I gave myself a target of four under for the back nine. I felt if I could do that I would be right there for the weekend and I managed to go one better."

Open champion Phil Mickelson, who sustained a back injury on the first day playing from the rough on the ninth - his final hole, closed with a birdie to go into the weekend on one under.