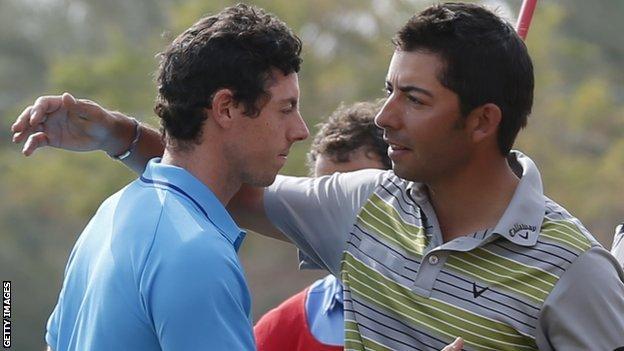 Spain's Pablo Larrazabal birdied the final hole to win the Abu Dhabi Championship on Sunday by one shot.

Larrazabal (67) finished on 14 under, one stroke ahead of major winners Rory McIlroy (68) and Phil Mickelson (69).

Open champion Mickelson fell back after a triple-bogey at the par-four 13th when leading, while McIlroy was left to rue a two-shot penalty in round three.

"I feel like I'm standing here and I should be 15-under par and win by one," said the Northern Irishman.

"I can count it as a moral victory more than anything else. It's a very positive start to the season so I'm not going to let one little negative ruin that."

Two years ago, McIlroy was penalised two shots in his second round in Abu Dhabi for brushing away some sand that was not on the green, but which lay between his ball and the flag. He went on to finish one behind surprise winner Robert Rock.

Mickelson's wound was also self-inflicted. The American was leading by one when he attempted to hit a right-handed escape shot from under a bush, only to suffer a 'double-hit' when his ball struck the bush and bounced back on to his club.

"It never crossed my mind it might double-hit," the left-hander said. "I was just trying to dribble it out of the bush, to move it about ten feet and I felt it was worth the risk.

3 - Number of wins on the European Tour

103 - World ranking at the start of the week

7 - Position in the Race to Dubai following his win

"I wanted to use a lob wedge but had to turn around a four iron as I was having trouble seeing the club at address."

The 43-year-old bounced back in typical fashion with birdies on the 14th and 16th, but was unable to find the eagle he needed on the 18th to force a play-off with Larrazabal.

McIlroy had played alongside Larrazabal and the pair were both three under for the day after 11 holes, but while McIlroy's challenge stalled with a run of seven straight pars, Larrazabal birdied the 13th and hit two superb shots to the heart of the 18th green to set up the decisive birdie.

McIlroy added: "Pablo played very well. I can't take anything away from him. He needed to he hit the shots and the two he hit into 18 were straight out of the top drawer, so fair play to him.

"He's a good guy, one of my closer friends out here and it's good to see him get the win."

A thrilled Larrazabel said: "I worked so hard for the last two years and over the winter. I beat two of the three most talented guys in my era."

Third round leader, Scotland's Craig Lee, was tied for tenth on seven-under after shooting a final round 77.

Northern Ireland's Michael Hoey posted a closing 73 to end in a tie for 10th place on seven under.