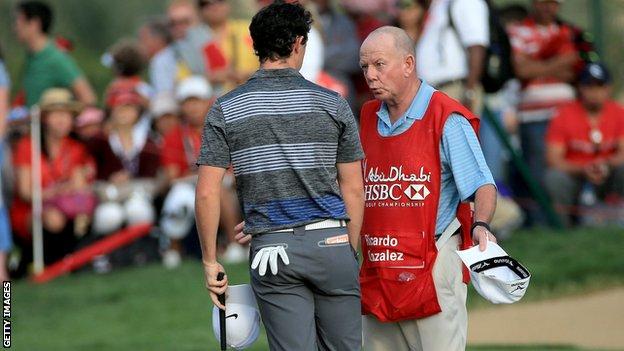 Golf must seem strange to anyone who doesn't follow it closely. The peculiarity of some rules makes what appears to be a simple game look bafflingly complicated.

To the outsider, events at last week's Abu Dhabi Championship were hard to fathom. Rory McIlroy took the fewest number of strokes, yet lost by a shot to Spain's Pablo Larrazabal.

The reason was a two-stroke penalty imposed during the third round for an unwitting rules breach that provided McIlroy with no advantage.

For the uninitiated it seemed perverse, nothing more than a technicality unworthy of influencing the outcome of the tournament.

On the second hole, the 24-year-old had driven into a spectator walkway, entitling him to a free drop under rule 25-1 if he wanted. This would be one club length away from the crossing at the nearest point of relief, not nearer the hole.

McIlroy dropped the ball but failed to realise he played his shot with his foot touching the white line signalling the border of the walkway. He had failed in his obligation to take "full relief" and the caddie of his playing partner spotted the error.

Ricardo Gonzalez's experienced bagman Dave Renwick waited until the end of the round to inform McIlroy there may be a problem. It was a shame McIlroy's caddie JP Fitzgerald didn't notice as he could have advised a re-drop before the fateful shot was played.

After an hour's worth of kerfuffle, the two-stroke penalty was imposed. There is no argument that due process was followed and that the penalty was correct.

But for the image of the game as a modern, transparent sport it was an all too familiar own goal.

No wonder one of the promoters was heard to sarcastically say: "This is just what we wanted, isn't it?" while the penalty was being determined.

The outcome was settled long after the world television feed had signed off. As far as the broadcast was concerned, the young star was perfectly poised a shot off the lead. The worldwide audience were oblivious to the fact that he would soon be three behind.

And when news of the penalty did emerge, it was hard to fight feeling that a stupid rule had led to a baffling outcome; something that could only happen in the curious world of golf.

After all, what possible advantage could McIlroy have gained?

But, in fact, it is not the rules that are at fault. It's the way they are administered that lets down the professional game in the modern era.

Golf is a simple game where you tot up the number of shots taken and the player with the fewest wins.

But legislating to create a level playing field for a sport played over 7,000 yards of varied terrain requires a highly complex rulebook.

In this case, what if McIlroy had orchestrated a drop that became advantageous if he stood the wrong side of the line addressing the ball? That would be unfair to the rest of the field who rule 25-1 is there to protect.

Indeed, for every rule there is a good reason, even ones capable of creating incidents of apparent injustice.

The real problem is that the professional game fails to take sufficient measures to limit the number of instances where the rulebook is made to look ridiculous.

Players should, of course, know the regulations and be self-policing. But this is a modern age of televised sport and, in golf, vigilante viewers are ready to pounce.

The players need due protection from on-the-spot officialdom. Referees should be present on every hole as a matter of course in top tour events and there should be back up observing TV pictures.

"It would cost a fortune, we couldn't afford it!" is the cry whenever the idea is suggested. Really? We are talking about events with big budgets that find fortunes in appearance and prize money.

How about also investing in credibility to the wider sporting public? It might yield a useful dividend for the image of the game.

Most other sports find ways for adequate officiating. Think how many line judges and umpires it takes to run a tennis tournament.

At the Open, each group has a walking rules official. It helps with administering rulings, efficiently preventing unwitting breaches and helps speed up play.

Had a qualified referee been with McIlroy and Gonzalez last Saturday, he or she could have ensured the Northern Ireland man's drop was completed correctly.

McIlroy would not have suffered his two-stroke penalty and fans might have seen the man with the lowest total win the tournament.

Simple. Just as it should be.