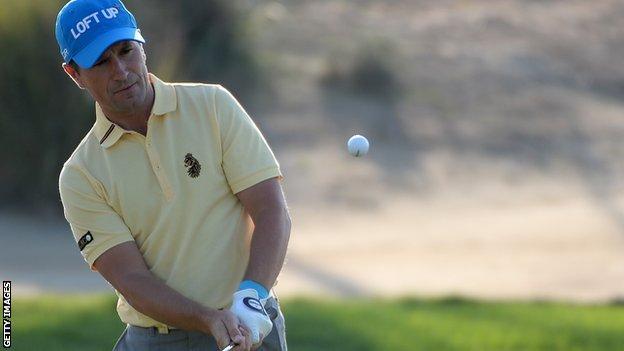 England's Steve Webster produced an albatross on his first hole at the Qatar Masters to help him to a share of second place after the opening round.

The 39-year-old holed his second shot to the par-five 10th at Doha Golf Club from 254 yards - the second albatross of his career with the same club.

He added five birdies and a bogey to card a seven-under-par 65 to finish the day alongside Dawie van der Walt.

Another South African, George Coetzee, leads by one shot.

It was the second albatross on the European Tour in three weeks after the Netherlands' Joost Luiten in the second round of the Volvo Golf Champions in Durban, also on the 10th hole.

Webster told Sky Sports: "I hit a great shot, obviously straight at it.

"Because I carry a big crowd following me, there were about two people behind the green and one of them started jumping up and pointing down and I didn't know if it had gone over the back into the rocks or in! I got up there and he started clapping and it was a dream start."

Webster, who used the same five wood for an albatross in the Italian Open in 2011, added: "I have never been three under after one before and you wonder, is this my day or have I had all my luck on the first hole? But I played great after that.

"I was really consistent, gave myself a lot of chances and made a few putts and was probably a little disappointed with seven under to be honest. I probably should have finished nine or 10 under, but it's a good start."

Coetzee, who was fourth in the Abu Dhabi Championship on Sunday, finished second in the Qatar Masters last year when England's Chris Wood won with an eagle on the 72nd hole.

Wood, from Bristol, made a disappointing start to his defence in Doha, finishing the first round tied for 86th on one over.

A 30-minute delay for morning fog meant three players were unable to complete their rounds, but 70 players were under par after it cleared to leave ideal conditions.

Former Open champions John Daly, Paul Lawrie and Ernie Els were all five under, Lawrie holing from 50 feet for an eagle two on the 16th and Els holing out from a greenside bunker on the 18th for an eagle of his own.

European number one Henrik Stenson quickly returned to form after a rare missed cut in Abu Dhabi, the Swede carding birdies at his last two holes to complete a 68.

Playing partner Jason Dufner, the US PGA champion, returned a 70 but the third member of the marquee group, former world number one Luke Donald, could only manage a 72, which featured a missed par putt from inside a foot on the fourth.

Northern Ireland's Darren Clarke was forced to miss out on his 500th European Tour appearance after pulling out with injury. The 45-year-old suffered a pulled muscle on Tuesday, and Sweden's Jens Dantorp took his place in the field.

Clarke won the Open Championship in 2011 but has failed to record a single top-10 finish on the European Tour since his triumph at Royal St George's.