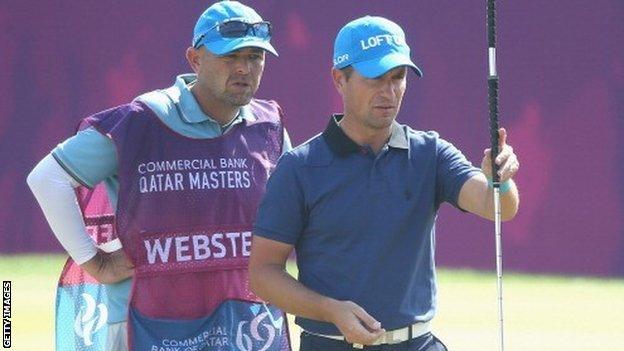 English duo Steve Webster and Matthew Baldwin stayed in contention with a share of third place after two rounds of the Qatar Masters.

Webster carded a three-under-par 69, while Baldwin fared even better with a 66 to leave the pair three shots adrift of leader Rafael Cabrera-Bello in Doha.

The Spaniard took the chance to impress playing partner and Ryder Cup captain Paul McGinley by shooting a 65.

Cabrera-Bello, 29, carded one bogey and eight birdies, five of the birdies coming in the last seven holes as he covered the back nine in 31.

"I start the year here and it doesn't feel like I have left home," he told Sky Sports. "Friday is another day and we start from scratch, playing one shot at a time and just going out there and keep enjoying myself."

Webster was unable to repeat his opening 65, however the two-time European Tour winner still managed to chip in for a birdie on his first hole on Thursday and the 39-year-old added five more and three bogeys.

"I missed the green with a lob wedge on the first and chipped in for a birdie, which was nice. I played good but didn't give myself enough chances so [I shot] 69. I'm happy with that."

Defending champion Chris Wood required a birdie on the 18th to make the cut, which fell at one under par.

Playing partners Luke Donald and Jason Dufner both finished three under, while European number one Henrik Stenson is two shots further ahead despite needing 14 holes to claim his first birdie as he laboured to a 71.