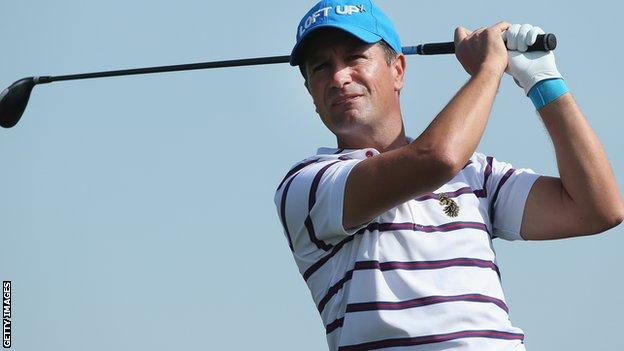 England's Steve Webster produced a strong finish to share the lead after the third round of the Qatar Masters.

The 39-year-old played the final 13 holes in four under to return a 70 and join overnight leader Rafael Cabrera-Bello of Spain on 12 under par.

Seventeen players are within four shots of the lead, including two-time Qatar winner Paul Lawrie (10 under) and Spaniard Sergio Garcia (nine under).

Englishman Chris Wood, last year's winner, is tied for 53rd on two under.

Cabrera-Bello started the day with a two-shot lead and extended his advantage with a birdie on the second, but dropped two shots in the last six holes to card a disappointing 73.

In contrast, Webster - who started the tournament with an albatross on his first hole - began poorly on Friday and was two over after five.

He said afterwards: "That wasn't pretty. I don't know what happened.

"I hit it really well on the range and I think I got a bit cocky on the course and hit so many bad shots the first six or seven holes; it was like I had never played golf before."

He was six off the pace after his poor start, but picked up shots on the seventh, 11th, 14th and 15th to boost his chances of a third European Tour title.

"On the back nine I gave myself a few chances and I knocked in a really good putt on 11 which made things feel a little better," added the Midlander.

"But the pins were tucked away a bit today and that's why the scores have pretty much stayed the way they were."

Scotland's Lawrie, who won in 1999 ahead of his Open triumph at Carnoustie and again in 2012, carded a 69 thanks largely to three birdies in four holes around the turn, while the highlight of Garcia's 69 was an eagle from 40 feet on the 10th.

The best round of the day belonged to France's Adrien Saddier, the world number 720 shooting a flawless 64 in only his fourth European Tour event as a professional.

That was four shots better than any other player and lifted the 21-year-old qualifying school graduate 42 places up the leaderboard into a share of third on 11 under, alongside Denmark's Thorbjorn Olesen and South African Thomas Aiken.