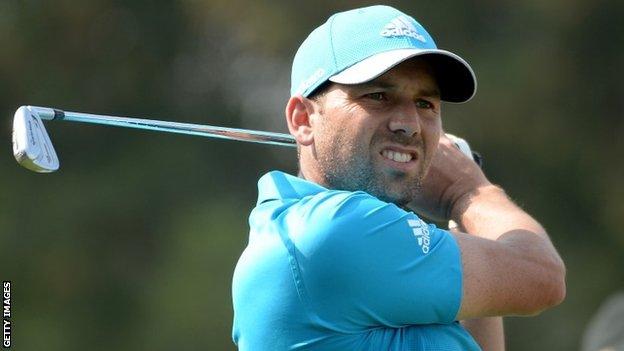 Sergio Garcia beat Mikko Ilonen in a play-off to win the Qatar Masters after both players had finished on 16 under.

The Spaniard, 34, hit a bogey-free seven-under 65 but missed a five-foot birdie putt at the last that would have won him the tournament in 72 holes.

Finland's Ilonen birdied the 18th for a six-under 66 to force the play-off.

But Garcia's birdie as they played the par-five 18th for a third time, after both players had missed eagle putts on the previous two holes, won the title.

"It feels good," said Garcia, who will move into the world's top 10 when the rankings are updated on Monday, after winning his first European Tour title in more than two years.

"The up and down from the bunker in the play-off was key and I'm very happy to be able to win it."

The Spaniard had missed from 10 feet on the first extra hole and then found the greenside bunker with his approach second time around.

His escape finished close enough for a tap-in birdie and put pressure on Ilonen who had a 20-foot eagle putt to win the tournament but his effort drifted wide of the cup.

With the light fading in Doha, the players headed back to the 18th tee for the third time.

Ilonen drove into the rough and then hit his second into the same bunker his opponent had been in moments earlier but his third shot from the sand finished 15 feet from the pin.

Garcia found the fairway and then the heart of the green with his first two shots but, although he missed his eagle putt for the title, he was left with a simple tap-in after Ilonen's birdie putt rolled three feet past the hole.

Garcia had started the final round three shots off the lead, which had been jointly held by England's Steve Webster and Rafael Cabrera-Bello of Spain.

But he picked up two shots on the pair with three birdies on the front nine and then holed four more on the back nine.

Two bogeys cost Cabrera-Bello as he carded a three-under 69 to finish in a tie for third on 15 under alongside Denmark's Thorbjorn Olesen (68) who missed an eight-foot eagle putt to make the play-off.

Webster's 70 saw him finish two off the pace in joint fifth.