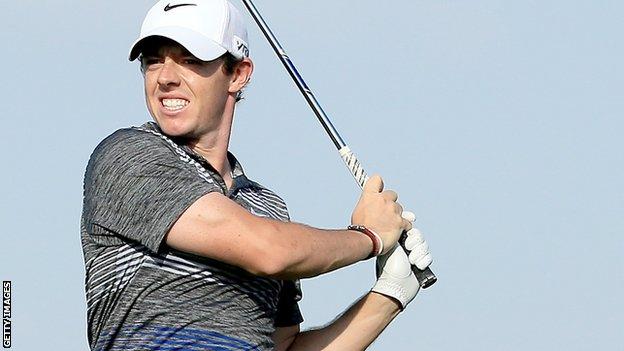 Rory McIlroy is hoping his encouraging return to form continues when he plays with Tiger Woods in Dubai this week.

Two of golf's biggest names - plus defending champion Stephen Gallacher - have been grouped for the first two rounds of the Dubai Desert Classic.

The 24-year-old former world number one from Northern Ireland won his first tournament as a professional at the event in 2009.

"This is a tournament that I like to come and play," said McIlroy.

However, last year he opted instead to open his season at nearby Abu Dhabi and then skipped Dubai, a decision which had drastic consequences as he missed the cut to set the tone for a disappointing season.

This year, McIlroy had made a point of returning to Dubai, two weeks after he opened his 2014 campaign in Abu Dhabi, where he missed out on the title only because of a two-stroke penalty imposed for a rules violation.

"It is nice to come back. I sort of missed it last year," added the current world number six.

"I played twice as an amateur here in '06 and '07, so the tournament has been very good to me giving me those invites and it was fitting in a way that I won my first tournament here as a pro."

McIlroy said he reached his lowest point last July around British Open time at Muirfield where he missed the cut and revealed he felt "brain dead" out on the course.

But, after taking four weeks off after the FedEx Cup play-offs to work with his coach Michael Bannon, he said he "found a couple of little keys" and took those with him into what was a reasonably successful Asian section of the year.

McIlroy then won the Australian Open - his only title of the year - and so nearly made it back-to-back wins two weeks ago in Abu Dhabi.

Woods and McIlroy have played together in tournaments several times, but never down the home stretch in a major and they have yet to produce fireworks when in the same grouping.

"It would be great if it happened. A lot of things have to fall into place for us to play well in the same week at the same venue," said McIlroy.

"But yes, the ultimate test would be going down the stretch with arguably the best player the game has ever seen."