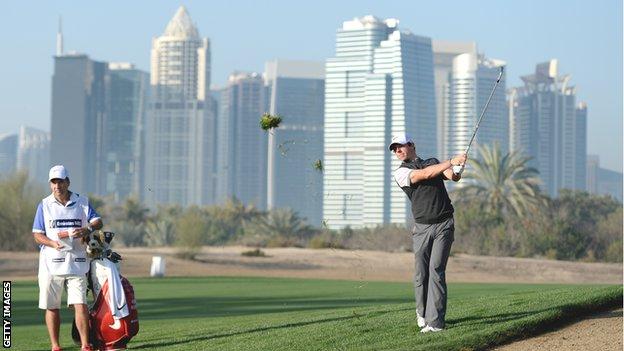 Rory McIlroy leads the Dubai Desert Classic by two shots after a superb nine-under-par 63 in the first round.

The two-time major winner from Northern Ireland carded five birdies on his front nine before adding two more birdies and an eagle at the fifth.

"I played really well from tee to green and drove the ball great again," said the 24-year-old.

Italian Edoardo Molinari is two shots adrift of McIlroy, with world number one Tiger Woods five off the pace.

Belfast's Michael Hoey opened with a 70, while Ballyclare's Gareth Maybin was a shot further adrift.

The Republic of Ireland's Shane Lowry signed for a 70, with Simon Thornton (75) and Peter Lawrie (76) well back.

McIlroy, starting on the 10th hole and playing alongside Woods, continued his excellent early-season form as he picked up shots at 12, 13, 14, 16 and 18.

"I think I only missed a couple of fairways and only missed one green where I had to really get it up and down," McIlroy, who won his first tournament as a professional at this event in 2009, told Sky Sports.

"I took advantage of how I am driving the ball and just need to do more of the same in the next three days."

McIlroy opened his 2014 campaign in Abu Dhabi, where he missed out on the title only because of a two-stroke penalty for a rules violation.

"This is a little lower than I went in Abu Dhabi and I feel very comfortable with my game," he added.Ireland's Damien McGrane and defending champion Stephen Gallagher are among five players on six under.