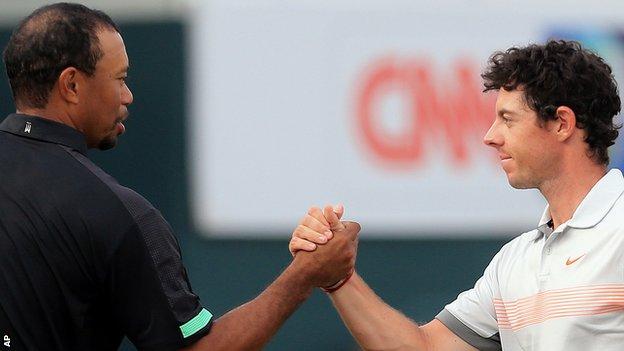 Rory McIlroy says he is confident of winning the Dubai Desert Classic, despite seeing his lead cut to just one shot in Friday's second round.

The Northern Ireland player followed his opening 63 with a more pedestrian two-under-par 70 to hold a narrow advantage over American Brooks Koepka.

Tiger Woods is eight shots off the pace after a disappointing 73.

That saw the world number one make the cut with just one shot to spare on three under.

For followers of the sixth-ranked McIlroy, Friday's round was a bit of a let-down after a sparkling nine-under-par opening at Emirates Golf Club, the scene of his first European Tour title in 2009.

Today was the best I have putted for a long, long time

Although he struggled in comparison with Friday, the 24-year-old's halfway total of 11 under par kept him on top of the leaderboard, one shot ahead of Koepka, whose flawless 65 equalled the lowest score of the day.

England's Danny Willett also shot 65 to share third place on eight under alongside Ireland's Damien McGrane and France's Julien Quesne, with Stenson and Gallacher among seven players another shot back after a 67.

McIlroy, the overnight leader by two shots, dropped his first shot of the tournament on his opening hole on Friday and also hit bad drives at the next two holes, although he did birdie the par-five third and, after picking up further shots at the fifth and seventh, admitted he expected to pull away from the field.

"I will just regroup and realise that I am still leading the tournament. I hit a couple of loose drives which I haven't done the last couple of weeks but I still feel like I'm playing well enough to go and win the tournament.

"I have led from the front quite well in tournaments that I have won. I feel like I am still playing well, I know the course as well as anyone else and I expect to go out there and shoot two good scores over the weekend and hopefully lift the trophy."

Stenson could well be McIlroy's biggest challenger after the Swede continued his excellent recovery from being three over par after five holes on Thursday.

"I think there is still a little way to go but today was the best I have putted for a long, long time," said Stenson, who became the first man to win the FedEx Cup and Race to Dubai in the same season in 2013.