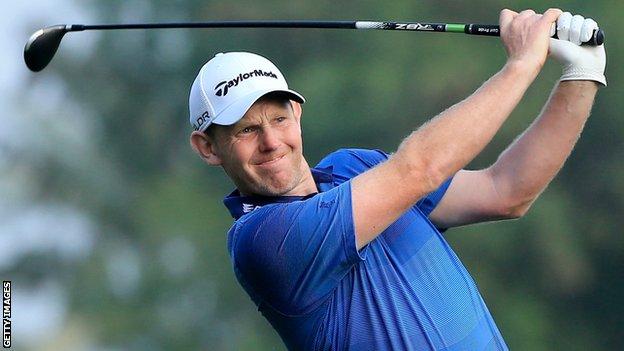 Defending champion Stephen Gallacher played his final 10 holes in 10 under par to take the lead after three rounds of the Dubai Desert Classic.

The Scot's nine-under-par score of 63 takes him to 16 under for the tournament, two strokes better off than overnight leader Rory McIlroy.

Denmark's Thorbjorn Olesen is in a share of third place following a 65.

"There's a lot of golf left to go but I will certainly be giving it my best shot," said Gallacher.

The 39-year-old from Linlithgow looked out of contention when he was seven off the lead after his opening eight holes at Emirates Golf Club.

But then came the joint-lowest back nine to par in European Tour history, with his brilliant 28, including an eagle, propelling him in front of the chasing pack.

"It was quite a struggle to start with, especially the first three holes," Gallacher told Sky Sports.

"I hit it stiff on nine and from then on just kept hitting it close, and if I hit it to 30 feet I holed it. I was just trying to make as many birdies as I could and get a lead because I found the last time it's easier when you are leading than chasing."

McIlroy, who opened the tournament with a 63, followed Friday's 70 with a 69, although the Northern Irishman did eagle the par-five third for the second time this week.

"I played okay," said the 24-year-old. "I felt like I could've hit a few more fairways and holed a few more putts, but two shots behind isn't bad. I've been in similar positions before and come out on top, so hopefully I can do it again.

"What Stevie did was phenomenal. I didn't know he was 10 under for the last 10 holes. That's some golf right there, especially as you've got some tough holes on the back nine. So that's very, very impressive."

Playing partner Brooks Koepka had been outshining McIlroy until bogeys on the 14th and 15th dropped him back to 12 under, to sit third alongside Olesen.

England's Steve Webster rocketed up the leaderboard with an eight-under-par round of 64 to end the day five shots behind Gallacher, while compatriot Robert Rock is on the same 11-under-par total following his 68.

European number one Henrik Stenson saw his challenge fade with a 75, dropping him down to four under par and Tiger Woods is just one ahead of the Swede after a 70.