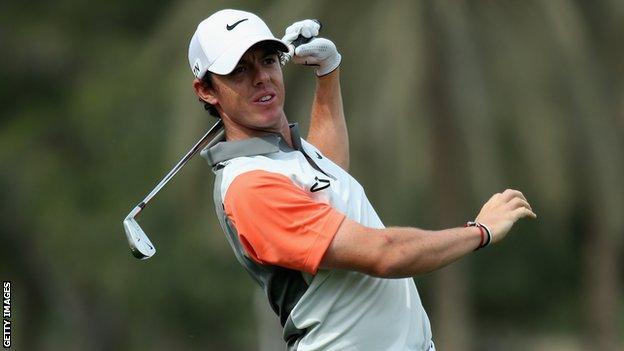 Rory McIlroy posted a disappointing final round of two-over-par 74 to end in a tie for ninth position on 12 under at the Dubai Desert Classic.

After starting the day in second place, McIlroy carded two birdies and four bogeys in his closing 18 holes.

Ireland's Damien McGrane finished joint 20th on 10 under while Michael Hoey had a bogey-free last round of 69 to tie for 54th spot on four under.

Scotland's Stephen Gallacher won on 16 under to retain the title.

Argentina's Emiliano Grillo was one shot behind Gallacher following a 66, while Romain Wattel and American Brooks Koepka ended a further shot adrift on 14 under.

Finn Mikko Ilonen shot the best round of the day, a 64, and was one of four players to end 13 under, along with Robert Rock, Steve Webster and Thorbjorn Olesen.

McIlroy had started the tournament in spectacular fashion, firing a 63 to end day one at the top of the leaderboard.

Subsequent rounds of 70 and 69 kept him in contention and early in his final round, he was tied for the lead with Gallacher on 14 under.

Koepka then hit the front as the leaders struggled to take advantage of the benign conditions and make any sizeable putts.

After bogeys at the seventh and 10th, McIlroy recorded his first birdie of the day at the 11th, but a further bogey at the 12th was followed by a bogey six at the 13th after a wayward drive.

A birdie at the 17th saw the Northern Ireland player recover some ground.