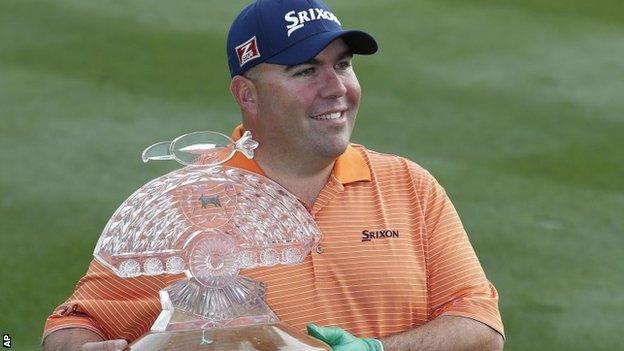 American Kevin Stadler won his first PGA Tour title at the Phoenix Open after Bubba Watson missed a five-foot putt on the last to force a play-off.

Stadler, 33, hit a three-under 68 for a one-stroke win over fellow American Watson and Canadian Graham DeLaet.

Victory for Stadler, son of 1982 Masters champion Craig, was his first in 239 PGA Tour starts, and earned him a place at Augusta this year.

The Stadlers are the ninth father-son winners in Tour history.

Former Masters champion Watson, who had a two-shot lead going into the final day, had his worst round of the week, carding a level-par 71.

American Hunter Mahan and Japan's Hideki Matsuyama finished in a tie for fourth, one shot further back.