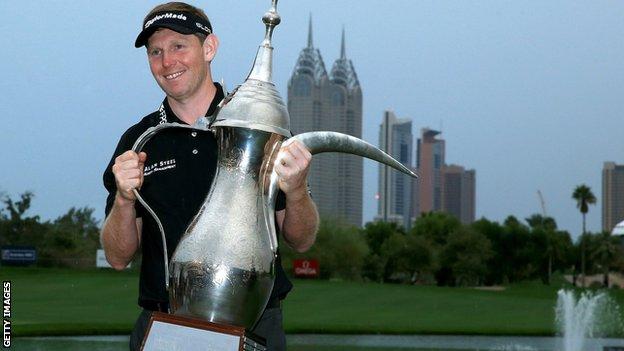 Stephen Gallacher is eager to "fulfil a lifetime ambition" of playing in the Ryder Cup after his successful defence of the Dubai Desert Classic.

The 39-year-old's victory lifted him into the top 40 in the world rankings, and into a Ryder Cup qualifying place.

And Gallacher, nephew of former Europe captain Bernard Gallacher, now hopes to secure a spot in the team for September's contest at Gleneagles.

"It's the pinnacle of a golfing career to play in it," he told BBC Scotland.

"My uncle was captain three times, vice-captain twice and played in it eight times, so it would mean a lot to the family."

It's a good start and the Ryder Cup is still seven months away, so I need to back it up now and play well in the big events

The £250,000 first prize for Gallacher's third European Tour title lifted the Scot to seventh in the Race to Dubai and 14th in the European Ryder Cup points list.

The top four players on the European points list will earn automatic selection for Paul McGinley's Europe team along with the next five on the world points list, while the skipper has three wildcard picks.

As it stands, Gallacher would qualify via his position on the world points list.

"I think it would give the country a boost if there was a Scot in the team and we are all trying hard to get there," he said.

"Paul Lawrie played last time and listening to his stories gets the hairs on the back of your neck standing up."

Gallacher's rise up the rankings has secured places at the lucrative WGC Match Play and Cadillac Championship events, before he makes his debut at the Masters.

"I'm desperate to play in the Masters," he said. "It's a tournament I grew up watching as a kid, seeing Sandy Lyle and Ian Woosnam winning.

"I've had the chance to play Augusta in the past, but I've held off because I wanted to play it for the first time in the Masters."

"It's a good start and the Ryder Cup is still seven months away, so I need to back it up now and play well in the big events," he added.

"I think that's my only chance. You need to be playing in the big ones to get the ranking points."

Gallacher, who finished his third round in Dubai with a remarkable 28 on the back nine, finished one stroke ahead of a field that included Tiger Woods, Rory McIlroy and Henrik Stenson.

"It was a good field," he said. "It's not really sunk in yet, but when I get time to reflect on it, I'm sure I'll give myself a wee pat on the back for doing so well.

"My long-term goal is the Ryder Cup, but you've got to do the day-to-day stuff and hopefully that will take care of it."