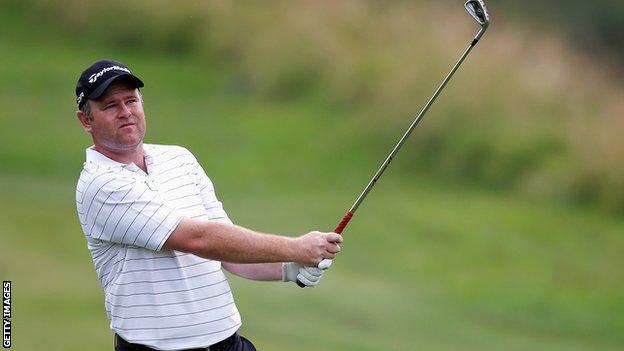 Scottish duo Alastair Forsyth and Craig Lee are in a four-way tie for the lead after the opening day of Joburg Open.

Forsyth, back after a three-year absence from the European Tour, shot seven birdies with no dropped shots.

"The front nine was probably as good as I've played in a long time," said the 38-year-old Glaswegian.

"I seemed to do everything right on the front nine, but I struggled a little on the back, where I ended up between clubs a few times. No dropped shots and seven birdies, so I'm never going to complain with that."

Lee has missed the cut in his last five tournaments in South Africa but was very pleased with his opening round of 65.

"I don't normally play well at all in South Africa; my record here is actually pretty pathetic," he said.

"It's probably a course that should have suited me in the past, because my strength has always been ball striking. I've never played that great a round here, but my game has gotten slightly better over the years," the 36-year-old added.

If Lee can maintain his good form, a maiden major appearance is up for grabs, with three places at The Open Championship on offer to those finishing in the top 10 and otherwise not exempt for Royal Liverpool in July.

"You don't really change your strategy, but it's a great reward for three lucky guys who'll get a chance to play in The Open," added Lee, who dropped his only stroke when his approach found sand at the 17th.

"It's nice to have qualifiers throughout the year and not just geared up to that 36-hole sprint that most qualifiers are. Hopefully we can keep the game up and take one of those spots."

South Africa's Richard Sterne, who won the tournament by seven shots last year, is in a tie for 13th place on five under par.