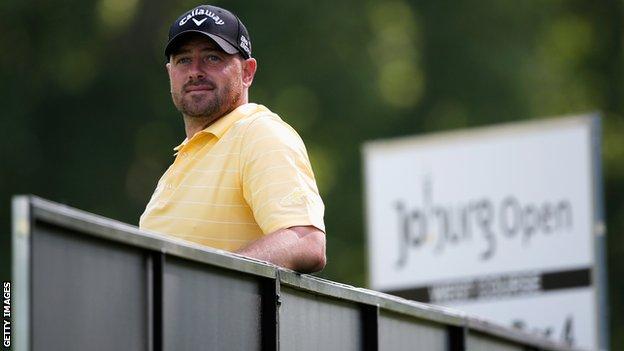 Scotland's Craig Lee is tied for the lead with Edoardo Molinari at the halfway point of the Joburg Open.

Lee carded a four-under-par 67 on the Royal Johannesburg & Kensington club's West Course to move onto 11 under.

Italian Molinari shot a four under 68 on the East Course to join Lee at the top of the leaderboard.

"The goal was to not fall back and there's a strong field behind you, so it was important that I didn't slip back," said Lee.

England's David Horsey and George Coetzee of South Africa were a further shot back on 10 under.

Horsey carded a seven under 63 while Coetzee returned to the clubhouse with a 68.

First round co-leader Alistair Forsyth is among a group of seven players tied for fifth place at nine under par after carding a one under 70.

Three competitors who finish in the top 10 of this tournament, and are not already exempt, will qualify for the Open Championship, which takes place 17-20 July.