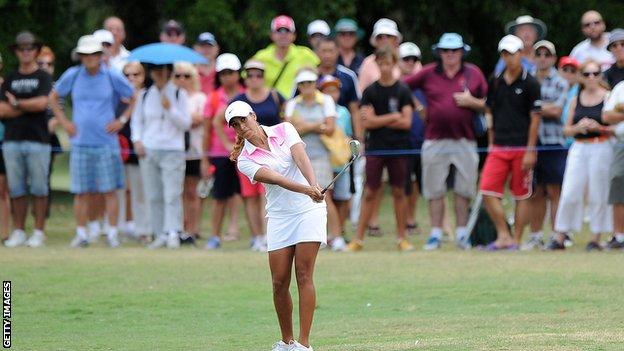 The 23-year-old American shot a final-round four-under-par 69 at Royal Pines on Sunday to finish on 16 under overall and win by two shots.

Cheyenne Woods at a glance

• Was guided by her grandfather, Tiger's father, during her junior career

• Won more than 30 tournaments as an amateur

"This is a huge accomplishment for me," said Woods, who finished with five birdies and a bogey.

"I've been pro for two years and, for the majority of it, people just think of me as Tiger Woods's niece so now I have a game of my own and I have a title now, a win, which is exciting.

"It's nice now to say to people that I can play and I'm not just a name.

"Growing up with the last name of Woods, there's a lot of expectations and pressure and spotlight on you but I always knew that I was able to win."

Woods won a minor event in the United States in 2012, but this was the biggest of her career so far and earned her a two-year exemption into Ladies European Tour events.

"I always knew I'd be able to compete with these ladies so now it's kind of a weight off my shoulders because now everybody knows, not just me," she added.

Lee, 17, had been level with Woods until the American closed with three birdies in her final six holes to seal victory.