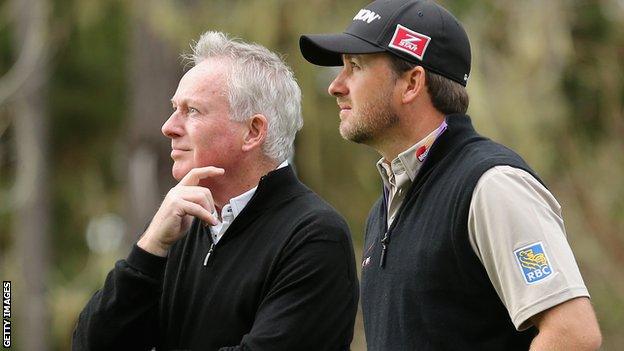 Graeme McDowell finished in a tie for seventh position at the Pebble Beach Pro-Am after posting an impressive closing round of 67 on Sunday.

The Portrush man carded seven birdies and two bogeys in his final 18 holes to end six under for the tournament at the venue where he won the 2010 US Open.

McDowell was five shots behind the winner, American Jimmy Walker.

A round of 72 left Padraig Harrington joint 27th on two under, but Paul McGinley missed the cut.

McDowell played the tournament, which was played over three courses, alongside his father Kenny.

Having started his challenge with consecutive rounds of 71, McDowell fired a 72 on Saturday, but improved his form on Sunday.

Three birdies on his outward nine were followed by a bogey at 11, but four birdies out of five holes between the 12th and the 16th saw him move up the leaderboard.

He dropped a shot with a bogey six at the 18th to fall back to six under.