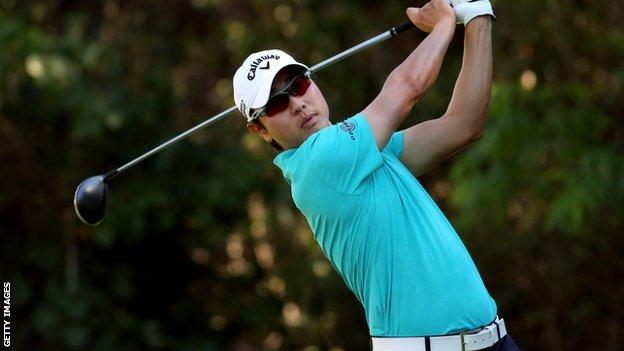 South Korean Bae Sang-Moon hopes to learn from his mistakes after reaching the halfway stage of the Northern Trust Open with a one-shot lead.

His five-under 66 puts him on nine under for the Californian tournament, one ahead of Australian Aaron Baddeley and American Robert Garrigus.

Bae, 27, led the same tournament last year, but fell away in the third round.

"It was really, really good experience and I learned a lot. I've improved a lot from last year," said Bae.

Baddeley, who is going for a first Tour win since winning this tournament in 2011, was in danger of being an also-ran until he found some form on the back nine, closing his round with four birdies to come back in 32.

Charlie Beljan is fourth on seven under, with fellow American and first-round leader Dustin Johnson one of four players one shot further back. Johnson struggled to repeat his Thursday form and signed for a one-under 70.

England's Lee Westwood is three under in his first tournament since parting company with coach Sean Foley, with compatriot Ian Poulter just surviving for the weekend after a one-under round left him level.

Padraig Harrington failed to make the cut, though, as did Louis Oosthuizen. Darren Clarke withdrew from the tournament after the first round because of a chest injury.