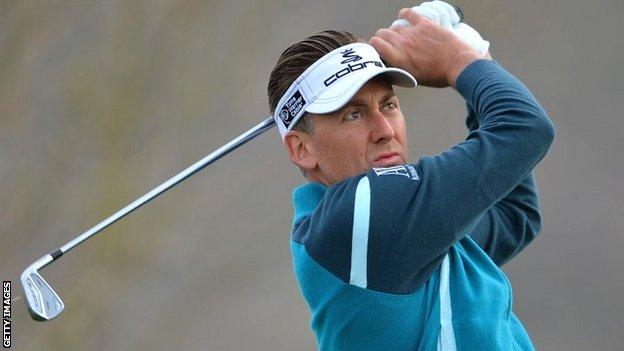 Former champions Ian Poulter and Luke Donald bowed out at the first-round stage of the WGC World Match Play at Dove Mountain in Arizona, USA.

Poulter, winner in 2010, was in the first match out at 07:25 local time and was three down after seven holes against Rickie Fowler, losing 2&1.

Rory McIlroy beat Boo Weekley 3&2 but was denied a meeting with Lee Westwood, who was thrashed 5&3 by Harris English.

The 64-man event is this year missing three of the world's top four players in Tiger Woods, Adam Scott and Phil Mickelson.

Players are divided into four groups, with the group winners going through to contest the semi-finals on Sunday.

After the opening three holes were halved, Fowler won three of the next four and needed only one birdie to do so.

Poulter won the 14th with a birdie from 18ft as world number 56 Fowler missed from much closer, but birdie chances went awry on the next three holes to seal his fate.

"Disappointed with my performance today, did not deserve to move on," the 38-year-old wrote on Twitter. "Congrats to Rickie Fowler."

Another former world number one, Westwood, ranked 31, was five down after 11 against 24-year-old English, the world number 39.

World number 17 McDowell was four down after seven to Woodland, ranked 54, and three down with three to play.

But the Northern Irishman won the 16th with a par, the 17th with a birdie and was conceded the 18th as Woodland went from one greenside bunker to another, before a birdie on the first extra hole sealed victory.

Sergio Garcia required 22 holes to get the better of Australian Marc Leishman, the Spaniard making a winning birdie on the fourth extra hole.

Dustin Johnson, the joint world number eight with Garcia, was three down at the turn to Peter Hanson of Sweden and was beaten 4&3.

The 29-year-old American has lost in the first round five times in the last six years.