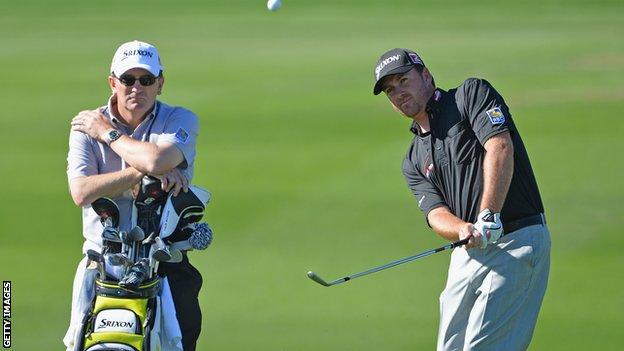 Graeme McDowell secured a dramatic win over Gary Woodland at the 19th hole in the first round of the WGC World Match Play at Dove Mountain in Arizona, USA.

McDowell was four down after seven and three down with three to play, but won the remaining three holes, before winning the extra hole with a birdie.

Tiger Woods, Phil Mickelson and Adam Scott are not part of the 64-man field.

Players are divided into four groups, with the group winners going through to contest the semi-finals on Sunday.

I feel very fortunate to have got through that match

The Northern Ireland golfer won the 16th with a par, the 17th with a birdie and was conceded the 18th as Woodland went from one greenside bunker to another, before a birdie on the first extra hole sealed victory.

McDowell acknowledged that he thought the game was over on the 16th green in his game against Woodland, with whom he had shared a private jet from Florida to Arizona.

"I missed a short one on 15 to follow him in for birdie and he looked unbeatable," McDowell admitted.

"He hit a six iron all over the flag on the 16th and I thought my manager had a plane ticket booked for me and I was going home.

"I feel very fortunate to have got through that match. Just when you think you are dead and buried, (you get) a little luck from the gods.

"Gary is a good friend and a great player and I think he's one to watch this year."

McIlroy lost to Shane Lowry at the opening stage last year but proved too good for Weekley to set up a last-32 clash with Harris English.

"I played well I guess for the first 12 holes," said McIlroy, whose wayward second shot on the 15th had spectators ducking for cover and saw one unfortunate man covered in cactus stems known as 'Jumping Cholla'.

"I might have got a bit complacent the last few holes and gave Boo a couple but I'm just happy to get through to the next round."

McIlroy was seeded to meet Lee Westwood in the second round but the Englishman's recent struggles continued as he was beaten 5&3 by English.