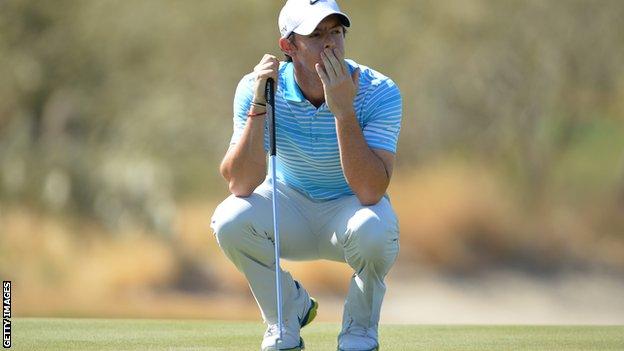 McDowell was two down against Hideki Matsuyama after 14 holes, but birdied the 15th and 17th and only had to par the last to win one up in Arizona.

Rory McIlroy crashed out to American Harris English after hitting a double bogey six at the first play-off hole.

McIlroy had won four out of five holes to go one up on the 16th.

English responded with a birdie on the 17th before McIlroy's double-bogey on the 19th.

McIlroy was behind for most of his match and hit a bogey on the par five 13th to go two down for the second time in the match.

The Northern Ireland golfer responded brilliantly with a flurry of birdies to win four out of five holes to take a lead for the only time after 16 holes, before a costly double-bogey on the first play-off hole.

McDowell's victory was the second day in a row he staged a remarkable recovery.

He was four down after seven holes against Gary Woodland on Wednesday, and three down with three to play, before winning the 19th hole.

A similar scenario unfolded against Matsuyama when he fell three behind after six holes before birdies at the eighth and ninth set up a tight back nine.

Matsuyama cracked when he missed a short putt on the 17th to allow McDowell to draw level and the Japanese player compounded that error by putting his tee shot into a bunker on the last hole.

McDowell parred the hole to complete another fine fightback.

Portrush man McDowell admitted that he felt "fortunate" to still be in the tournament.

"I thought I was dead and buried both days," McDowell said.

"I've certainly expended all my energy and emotions the last couple of days but thankfully it's early in the season and I've plenty left in the tank."

McDowell's victory sets up a last-16 meeting with 2012 winner Hunter Mahan, which will be a repeat of the decisive 2010 Ryder Cup singles won by the Northern Irishman.

"It's been a long time, a lot of water under the bridge since 2010," continued McDowell.

"He's a quality player. He's got a great record around this golf course and he's going to be a tough nut to crack."

McIlroy insisted he wasn't downhearted despite his defeat by English.

"I don't feel in any way disappointed leaving so early because I feel like my game is there. I'm looking forward to the next couple of weeks."