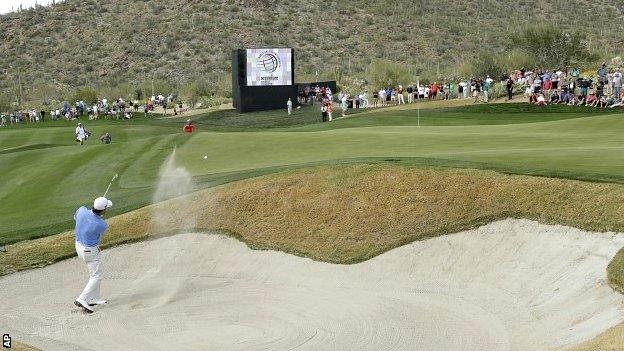 Graeme McDowell bowed out of the WGC Match Play in Arizona after Frenchman Victor Dubuisson beat him one up.

The Northern Irishman was seeking to reach the semi-finals for the first time but crucially lost the 16th hole.

Rickie Fowler lost four successive holes to Jim Furyk but recorded a 2&1 victory and he will now face Jason Day, who beat Louis Oosthuizen one up.

McDowell, who won the European Tour's Match Play tournament in Bulgaria last year, had staged remarkable recoveries in all three of his matches this week, needing to hole from 20 feet on the 20th hole to avoid defeat by Hunter Mahan on Friday, before beating the American at the 21st.

The 34-year-old world number 17 had played 58 holes to reach the quarter-final and had never stood on any tee with the lead but was two ahead after only three holes against Dubuisson, courtesy of an eagle and a birdie.

However, Dubuisson, ranked 30, picked up two birdies to level the match and then went ahead at the ninth after chipping in for another birdie.

It was all square after Dubuisson took six at the par-five 13th but McDowell went behind ahead again after three-putting the 16th.

McDowell had a birdie putt of 20 feet to take the match into extra holes but this time it drifted by on the left.

Els, 44, remains on course to become the oldest winner of the tournament, a distinction currently held by David Toms, who was 38 when he triumphed in 2005.

The big South African, four times a major champion and winner of seven Match Play titles at Wentworth, had three birdies in taking a one-hole lead at the turn against an increasingly exasperated Spieth.

As Spieth imploded, Els needed only pars to win three holes on the inward nine, and said afterwards: "I wouldn't say I'm at my career best but I made some key putts."

Oosthuizen received lengthy treatment on his back from his physio before play started but carved his opening tee shot into the desert.

After attempting to hack clear from a bush, the 2010 Open champion quickly conceded the hole to Day and seemed likely to fall two down after another errant drive on the second.

However, this time Oosthuizen took a penalty drop and then hit a superb third shot with a fairway wood on to the green, holing the putt from 20 feet for an unlikely winning birdie.

But Day won the next two holes, went two ahead at the turn and remained in control.

"It got better - the last four or five holes I felt I could get through the ball better," Oosthuizen said of his injury. "It's a bit painful that it always happens when I'm playing well and I need to address it big time and get it sorted.

"I felt I played really well but you can't give away holes to a guy like Jason."

Fowler, who has missed his first three cuts of the year in strokeplay events, had three birdies in winning three of the first four holes against Furyk but three successive birdies from his veteran opponent levelled the match at the 15th.

Furyk went ahead with a par at the next but then dropped a shot at the 17th.

At the last the 43-year-old former US Open champion fluffed a chip, which rolled back to his feet short of the green and Fowler progressed with a par.