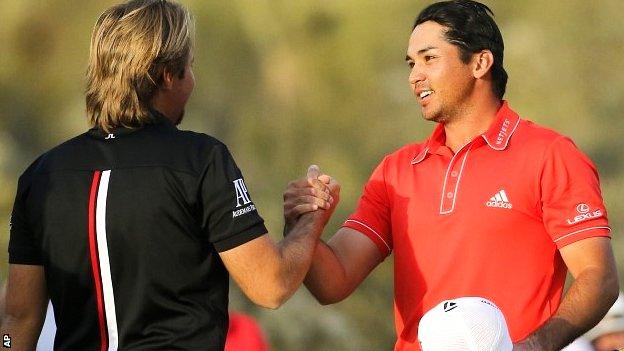 Dubuisson, the world number 30, making his maiden appearance in the event, was seeking to become the first French-born player to win on the PGA Tour.

He won the last two holes to extend the match but after two incredible escapes he lost to Day's birdie on the 23rd.

In the third-place play-off Rickie Fowler beat Ernie Els at the 19th hole.

Dubuisson, 23, who came to prominence by beating Justin Rose and Tiger Woods to capture the Turkish Open last November, made a slow start in the final, much as he had done in his semi-final earlier in the day against veteran South African Els.

Now ranked 34, Els won three of the first four holes, but the Frenchman rallied with three birdies in four holes and went one up after 12.

It was all square playing the last, but Els found the bunker with his second and his 12-foot putt to keep the match alive drifted by on the right.

Els, 44, who won seven match play titles at the West Course at Wentworth from 1994-2007 but has never gone beyond the last four in the WGC event, generously conceded his opponent's two-foot putt.

In the final, Dubuisson lost the first two holes after two dropped shots but won the next two with a birdie and a par.

Day had moved three up after eight holes in his semi-final against world number 56 Fowler, which he went on to win 3&2, and a par and a birdie put him two holes clear again after the seventh hole of the final.

The advantage extended to three when Dubuisson conceded the ninth after hooking his second into the cacti.

Dubuisson pulled a hole back at the 13th when a neat chip secured his birdie and Day could only make par.

The gap was one playing the last after Dubuisson kept the match alive with a downhill birdie putt from 10 feet at the 17th.

Day played his approach first, finishing at the back of the green 68 feet from the cup, while Dubuisson was closer but in a greenside trap.

He played an exquisite escape to four feet and after Day left his return putt from nine feet an inch short, Dubuisson calmly holed to take the match to the 19th.

Dubuisson then put his second shot at the 19th way over the green into a seemingly unplayable lie wedged into the cacti, but chipped out to three feet as the hole was halved in par fours.

Another wayward approach from Dubuisson finished in an equally implausible spot beneath roots surrounded by rocks but he somehow hacked out to eight feet and rolled the putt into the middle.

The next two holes were halved, but in the gathering gloom, Dubuisson chipped to the back of the 15th green - the fifth sudden death hole - and could only make a par four, leaving world number 11 Day to hole out from three feet for the title.

In the consolation match, Els birdied the 18th to extend his match with Fowler, but the 25-year-old American prevailed with a birdie at the first extra hole.