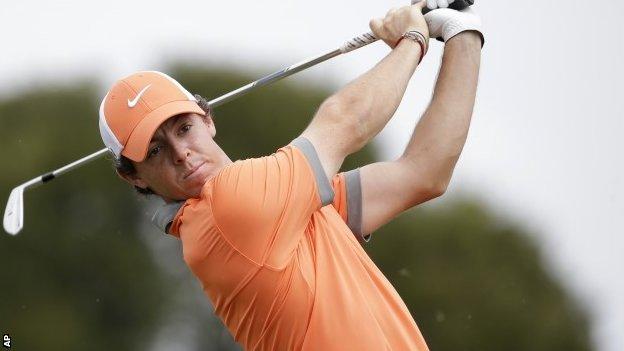 Northern Ireland's Rory McIlroy shot a first-round seven-under 63 to lead the Honda Classic in Florida by one shot.

McIlroy, who won this title in 2012 to become world number one, birdied his last two holes to cap a fine bogey-free round to lead American Russell Henley.

Jamie Donaldson of Wales is in a tie for third after carding a five-under-par 65, while England's Luke Donald is two shots further back on three under.

Tiger Woods is eight shots off the lead after shooting a one-over-par 71.

McIlroy was seven over after eight holes of the second round when he infamously walked off the Palm Beach Gardens course citing toothache to bring a premature end to his defence of the title last year.

However, the world number eight started Thursday's round in fine form with a 27-foot birdie putt at the second and followed that with tap-in birdie at the par-five third.

Three successive birdies from the ninth, including a 45-foot putt on the 11th, took him to five under before his late surge saw him establish a one-shot lead.

"I played really solid," said McIlroy. "I think the key around here this week is hitting fairways and greens.

"It is ball-striker's golf course. If you can keep the ball in play and give yourself birdie chances, that is the name of the game here."

American Zach Johnson hit a quadruple-bogey eight on the par-four 11th, his second, but recovered to post a 67 and join Donald, who had a six on the same hole, on three under.