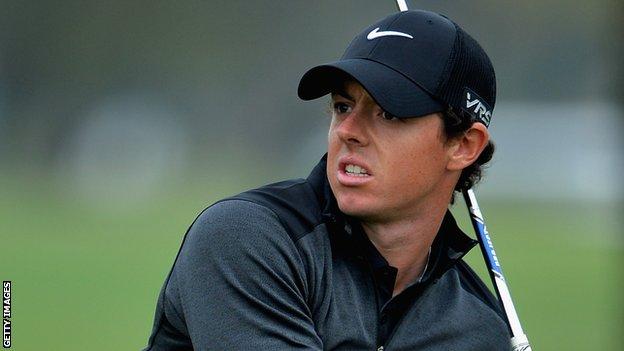 A second-round 66 left Rory McIlroy with a one-shot lead at the halfway stage of the Honda Classic in Florida.

Northern Ireland's McIlroy built on his fine opening 63 as he regrouped from two early bogeys to reach 11 under par.

When you hit a few good shots, your confidence can go up quite quickly but then you hit one bad one, it can sort of go down again

South Africa's Brendon de Jonge is a shot back in second, while England's Lee Westwood and Scotland's Russell Knox are in contention on seven under.

Wales' Jamie Donaldson is on six under, while world number one Tiger Woods only made the cut with a shot to spare.

The American's round of one under left him at even par but compatriot Phil Mickelson missed out after finishing at one over par following a 71.

Knox was blemish-free as he sunk seven birdies in his 63, which matched the best round of the day, while Westwood showed a return to form in a 65 that contained six birdies.

American Russell Henley was a shot ahead of Westwood and Knox after a final-hole birdie saw him complete a 68.

McIlroy, who won this title in 2012 to become world number one, endured a shaky start as he bogeyed the 11th and 12th after beginning at the 10th.

However, the current world number eight regrouped with birdies on the 16th and 18th to turn in level par before picking up four birdies in five holes from the third on his back nine.

"When you hit a few good shots, your confidence can go up quite quickly but then you hit one bad one, it can sort of go down again and that's where I was sort of most of last year," he said.

"Now I feel I'm happy with where my swing is, and even if I do hit a loose shot, I can get over it much quicker and much easier because I have the confidence in what I'm doing."

The 24-year-old's performance was in marked contrast to last year's corresponding round in the event.

McIlroy was seven over after eight holes of the second round 12 months ago when he infamously walked off the Palm Beach Gardens course citing toothache, bringing a premature end to his title defence.