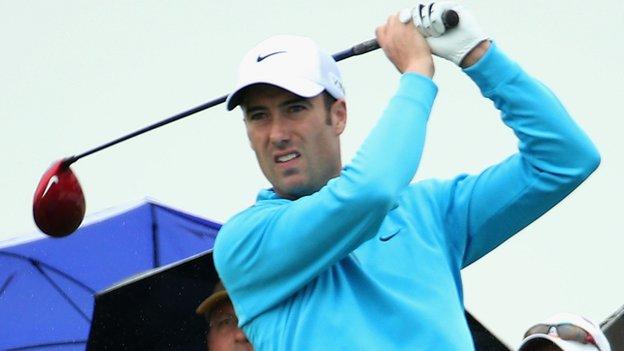 The 33-year-old carded a two-under-par 70 to finish on 20 under, three ahead of Northern Ireland's Michael Hoey and South African Danie van Tonder.

It was Fisher's fifth victory on the European Tour and his first since the 2010 Irish Open.

Chris Wood finished on 13 under in a tie for sixth, with fellow Englishman Simon Dyson two shots further back.

But as he stepped onto the 15th tee, his lead had been whittled down to two strokes by both Van Tonder and Spaniard Carlos Del Moral, who eventually finished fourth on 16 under after a final-round 68.

Fisher had picked up just a single stroke for the round until that point, but he saved his best for when it counted as he reached the 15th green in two before holing a 30-foot eagle putt.

Careful pars at 16 and 17 ensured Fisher was able to walk up the 18th with victory assured and, while he finished with a bogey, a long-overdue win was secured for a player who has been as high as 17th in the world.

The victory leaves Fisher 16th in the Ryder Cup standings and is set to lift him up 30 places to 52nd in the world rankings.

"It was testing out there owing to the weather conditions so I am thrilled to be champion," he said.

"I had a couple of wobbles but always believed the trophy would be mine. The 15th was the key hole. It was my second birdie of the tournament there and I felt confident about the putt after taking my time reading the line.

"Putting has been my Achilles heel for many, many years, but I loved the greens here and got the lines correct most of the time."