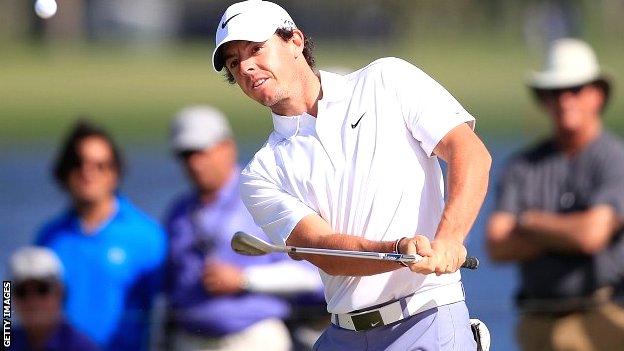 Rory McIlroy completed a two-under-par 70 to trail by two shots after the delayed first round of the WGC-Cadillac Championship at Doral in Florida.

The Northern Irishman resumed one under after 14 holes following Thursday's storms and collected two more birdies before bogeying his final hole.

American Patrick Reed has a one-stroke advantage at four under.

Woods, who will be deposed as world number one if he finishes outside the top 10 and Adam Scott wins the tournament, withdrew in the final round of last week's Honda Classic because of back trouble.

The 38-year-old was two over after 10 holes when play was suspended because of fading light on Thursday, then dropped four shots in as many holes to slip to six over when he resumed on Friday morning.

Three successive birdies followed but another shot went at the par four 18th after he drove into the water and had to hole a putt from 15 feet for a five.

Scott fared only stroke better after a similarly mixed round.

Australian Jason Day, who withdrew from the event with a thumb injury, won the first of the four-tournament series - last month's WGC Match Play - with the Bridgestone Invitational and the HSBC Champions due to take place later in the year.