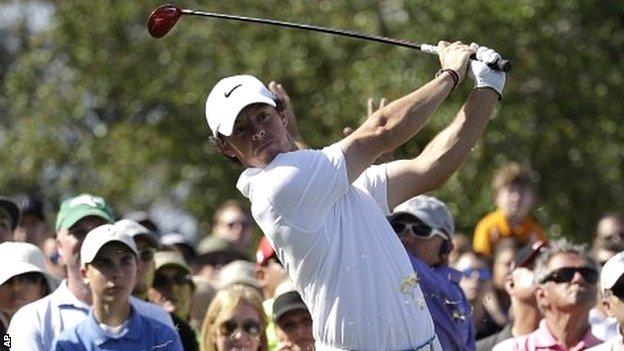 Northern Irishmen Rory McIlroy and Graeme McDowell are one shot off the lead at the halfway stage of the WGC-Cadillac Championship at Doral.

Welshman Jamie Donaldson carded the low round of the day with a two-under 70 and is also one adrift at level par.

Tiger Woods is six shots adrift after a 73 on a day when gusting winds caused more than 100 shots to find water.

Woods, who earlier in the day completed a first-round 76, his highest score in 40 completed rounds at the formidable Blue Monster course, mixed five bogeys and four birdies, including a 91-foot putt at the par three fourth, and declared "we've all got a shot at it now".

The four leaders are the only players under par for the event, but at the same stage of last year's tournament 43 were in red figures.

With 14 of the 18 holes at the redesigned Trump National lay-out featuring water, only Donaldson, McDowell (71) and American Chris Kirk, who shares 11th after a 71, returned under par second rounds on a day when the average score was four-over-par 76.

"It was just about playable," said McDowell, who dropped only one stroke in round two. "I can't remember playing in stronger winds, certainly on this side of the pond."

McIlroy, who began the round two shots off the lead after an opening 70, played the first nine in 40 after two bogeys and a double bogey but picked up his first birdie with a six-foot putt at the 11th.

At the 224-yard part three 12th he sent a five-wood to 18 inches from the flag to earn another birdie and, after dropping a shot at the 14th, he birdied the 16th having driven through the green at the par four hole.

Donaldson took his shoes and socks off and stood in the water to play out from the edge of a hazard at the eighth to make one of three birdies in his round.

He recovered to compile five birdies and, with no cut in the event, Mickelson is in a group including Woods and Englishman Ian Poulter sharing 25th place at five over.

World number two Adam Scott, who can replace Woods at the top of the world rankings if he wins the event and the American finishes outside the top-10, is one shot better off in a tie for 21st at plus four after a second successive round featuring four birdies and two double bogeys.