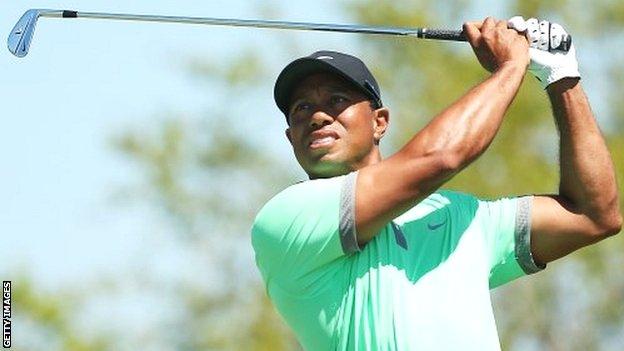 World number one Tiger Woods made eight birdies in a 66 to move within three shots of the lead going into the WGC-Cadillac Championship's final round.

The defending champion's six-under-par round was the lowest of the week and leaves him joint fourth with Welshman Jamie Donaldson on one under at Doral.

American Patrick Reed, the joint overnight leader, had an eagle in his 69 to lead by two shots at four under.

It was a tough day. I hit two balls in the water on eight.

Rory McIlroy is seven adrift after a 75 and Graeme McDowell (73) is five back.

After Friday's gusting breezes caused mayhem, with more than 100 balls finding water, conditions were much calmer in the Florida sunshine for day three at the re-modelled Trump National course, nicknamed the Blue Monster.

Woods, seven times a winner of this event, began the day six strokes adrift but holed some impressive putts, including a 35-foot effort at the 16th, and made four birdies on both the front and back nines.

The 38-year-old withdrew in the final round of last week's Honda Classic because of a back injury and said of the problem: "It's a little better but it gets progressively sore as the day goes on.

"It was nice to get back in the tournament again."

World number 44 Reed has won two PGA titles - the Wydham Championship in North Carolina last August and the Humana Challenge in California in January - and is in contention for a third at Doral.

The 23-year-old rattled in a 25-foot putt to eagle the eighth and drove pin high at the par-four 16th to collect his third birdie of the round.

Dustin Johnson, one of four players leading after round three, had a mixed one-over 73 containing a double bogey when his chip out from under dense shrubbery rebounded back to him off the edge of a cart path.

The American world number 10 hit a drive and a wedge to three feet at the last for a birdie to get back to level par and a share of sixth.

Northern Irishman McIlroy, only one shot off the lead after two rounds, pulled his tee shot into the water and took a seven at the par-five eighth.

A birdie putt that stayed on the lip of the hole at the ninth typified his day and he hit another tee shot into the water at the 10th, needing to hole from 20 feet just to make a double bogey.

"It was a tough day," McIlroy said. "I hit two balls in the water on eight, I didn't play the par fives well at all. I played those in four over, so when you do that here you're sort of putting yourself behind the eight-ball a little bit."

The 24-year-old finished more favourably by chipping in from the rough surrounding the green at the last for his third birdie of the round to share 19th place.

Playing partner Donaldson briefly led the tournament after two birdies in his opening four holes, and the 38-year-old remained in contention after a solid 71.

"I am enjoying myself," Donaldson said. "It is a tough battle out there as the course is playing really difficult, but I am getting slowly more used to playing golf over here. I just need to make a few more putts."