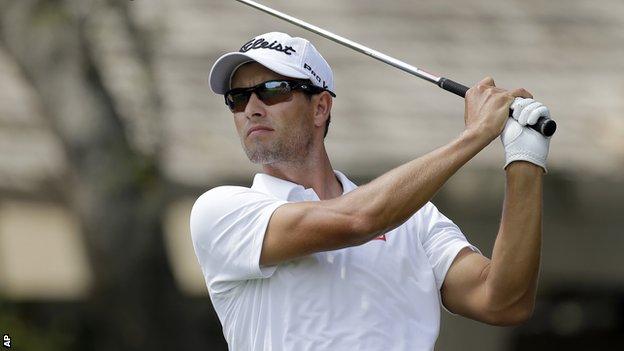 Adam Scott maintained a healthy lead after the third round of the Arnold Palmer Invitational in Florida.

The Masters champion hit a one-under 71 to claim a three-shot lead having led by seven overnight.

Keegan Bradley is his closest rival after a six-under 66, which was matched by Matt Every one shot further adrift.

Italy's Francesco Molinari leads the European challenge at five off the lead, and England's Ian Poulter is two shots further back.

Scott saw his healthy halfway lead slashed to a single stroke after playing the first five holes in two over, but then rallied to lead by five with two holes remaining.

However former US PGA champion Bradley birdied the 18th and Scott bogeyed the 17th to leave the destiny of the title - and with it the world number one ranking - in the balance.

If Scott wins this tournament and neither he nor Tiger Woods, who withdrew from this event with back trouble, play again before the Masters, the Australian will assume top spot in the rankings before beginning his defence of the year's first major.