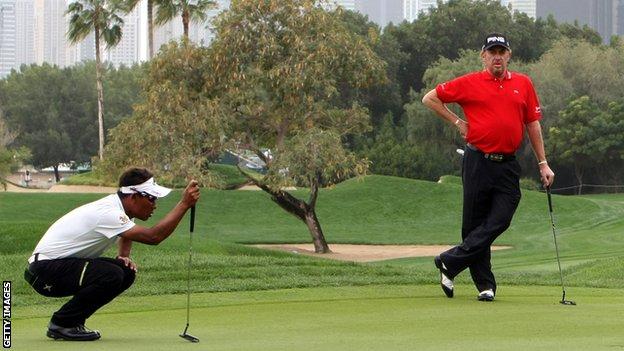 This week's intercontinental clash for the EurAsia Cup is a match that will be won both on and off the golf course.

The build-up to the event has been overshadowed by a rancorous dispute involving one of the best-loved names in the game, with the European and Asian Tours pitted against the family of the late Seve Ballesteros.

The row has developed because the EurAsia Cup effectively usurps the Royal Trophy, a team contest between Asia and Europe played since 2006 that was Ballesteros's brainchild and run by his company.

In its early years, the Royal Trophy was accorded approved status by the European Tour but business relations between the Wentworth-based circuit and the Ballesteros family firm, Amen Corner, have significantly deteriorated since then.

The European Tour, meanwhile, recognises the importance of strengthening its links in the Far East - and accordingly knows the potential of a match such as the one that will be played in Kuala Lumpar this week.

Asia remains the great golfing battleground for those looking to exploit areas of growth. Two native circuits, the Asian Tour and the One Asia Tour, compete ferociously to stage top professional events.

The European Tour has long since had a foothold in the continent while the PGA Tour has been stretching east from the United States.

Amen Corner's foothold was the Royal Trophy, but tucked away in the calendar and always played in Asia it struggled for resonance. The potential of the match was never fully exploited.

The same cannot be said of the Ballesteros name. The memory of the five-time major champion has been repeatedly invoked during the run-up to the EurAsia Cup and European Tour boss George O'Grady prompted fury when he claimed Ballesteros would have "cherished" the new contest.

The remarks led to the release of a copy of a letter from the Spaniard to the Asian Tour that was sent in 2010, a year before his death from brain cancer.

"The Royal Trophy is an event which has a very special place in my heart," wrote Ballesteros. "It is a legacy of mine that I passionately desire to leave for future generations.

"We have been informed by the European Tour that the Asian Tour is interested in developing an event in this very same format.

"I sincerely hope that the news I have received is a misunderstanding and that the Asian Tour will be willing to join us in the Royal Trophy on mutually acceptable terms but will not be intending to copy it.

"This would certainly not meet the standards of morality and fairness which are the trademark of our sport."

These are powerful and emotive sentiments coming from such a beloved golfing figure, but there is a bigger picture.

In the harsh world of golfing business, the European and Asian Tours feel better placed to exploit such a potentially important match.

So this week Miguel Angel Jimenez leads his 10-strong Euros against an Asian team skippered by Thailand's Thongchai Jaidee at the Glenmarie Golf and Country Club.

Of those involved this week, Jaidee and compatriot Kiradech Aphibarnrat both played in the last Royal Trophy, as did Stephen Gallacher and Thorbjorn Olesen for the Europeans.

BBC Sport columnist Graeme McDowell is the biggest name on duty. In his most recent blog the Northern Irishman stated his belief that there is only room in the calendar for one form of this contest.

It is certainly in the interests of both continents that the event proves a success but it is curious that it is being launched in a Ryder Cup year.

The plan is that it becomes a biennial match in non-Ryder Cup seasons and should become Europe's equivalent of the Presidents Cup - the fixture between the United States and a Rest of the World team, minus Europe.

As a team competition, there is a gap in the market following the apparent demise of another Amen Corner project, still more closely associated with Ballesteros, the Seve Trophy, which pitted continental Europe against Great Britain and Ireland.

Another crucial difference between the EurAsia Cup and the Royal Trophy is that it is proposed that it become a home-and-away match like the Ryder Cup. That way it stands a chance of being noticed in Europe.

More immediately it is an opportunity for the likes of Jamie Donaldson, Victor Dubuisson and Joost Luiten to represent their continent ahead of likely Ryder Cup debuts in September.

Europe's captain at Gleneagles, Paul McGinley, will be on hand while one of his deputies Des Smyth will serve as vice-captain to Jimenez.

On and off the course there is no doubt this can serve as a golfing week of some significance. That is why it has generated such strong feelings among the rival factions in the background.